Apple's iPhone 11 was the most-shipped smartphone in the first half this year and has been the single most popular handset of 2020, according to new research by Omdia. 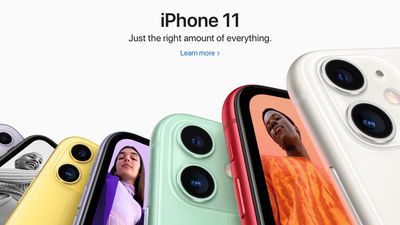 A key driver of the success of the ‌iPhone‌ 11 was adjudged to be the lower starting price, which is $50 cheaper than the ‌iPhone‌ XR yet adds significant hardware improvements. The report notes that due to these improvements, ‌iPhone‌ sales have remained strong in 2020, despite the global health crisis.

Shipments of the ‌iPhone 11 Pro Max‌ and ‌iPhone‌ 11 Pro models decreased compared to the previous ‌iPhone‌ Xs Max and Xs, but their rankings improved, according to Omdia.

According Omdia’s smartphone market tracker report, Apple shipped 13% more iPhones in the second quarter this year compare to the previous year thanks to the success of the iPhone 11 and the newly released iPhone SE.

Last year's list featured four Samsung models, whereas this year's featured just one mid-tier model. None of Samsung's flagship devices made the top 10, and were instead replaced by Xiaomi's Redmi's line of devices, doubling the number of Xiaomi models compared to 2019.

Rumors suggest there will be two sizes of the ‌iPhone 12‌ Pro, including one with a 6.1-inch display and another with a 6.7-inch display. The devices are expected to be introduced in October.

PickUrPoison
Wow, Apple just killing it, selling 3.5 times as many units as the next best seller, even though iPhone 11 is $700+

The SE was available for pre-order on 17 April and available at retail and carriers a week later. So it was being sold for about 2.5 of the 6 month period, and sold 8.7 million.

The 11 had a lcd screen just above 720p HD, and they smashed every phone on the market easily. ??

The 720p display on the iPhone 11 / Xr is probably the highest quality LCD panel in a smartphone. Turns out most people who buy phones probably don't care about or notice 360 fewer pixel rows.

DinkThifferent
So where are the Galaxy S20 and S20 Ultra?

Whoopsie Daisy Samsung. You can copy everything from Apple, except their success.

One word coronavirus. People were looking to spend as little as possible this year, as many lost their jobs.

The 720p display on the iPhone 11 / Xr is probably the highest quality LCD panel in a smartphone. Turns out most people who buy phones probably don't care about or notice 360 fewer pixel rows.

It's the classic megapixel race, where manufacturers were boasting higher number to make it like theirs are better than the others. Today, it's amplified by youtubers/tech journalists who are trying to get views/likes in the echo chamber.

In reality, there are other things in display hardware other than resolution/ppi. There are color accuracy, brightness, consistent backlight for LCD, etc.
Score: 8 Votes (Like | Disagree)

In reality, there are other things in display hardware other than resolution/ppi. There are color accuracy, brightness, consistent backlight for LCD, etc.

Yup, basically all of the points that Apple does very well in for both their LCD and OLED panels.

When I got my iPhone X nearly three years ago, I put it next to my friend's Pixel 2 (which also has an OLED panel) and the Pixel 2 couldn't match the iPhone for brightness or colour uniformity. The Pixel 2 also suffered from a blueish tint as the brightness went over 75% or so.

Apple might not be first with the stuff they do, but they generally do a good job when it does come.
Score: 8 Votes (Like | Disagree)

Samsung Is up there and that’s Android.

He said high end Samsung phones, all them phones on the list are mid range phones.
Score: 7 Votes (Like | Disagree)
Read All Comments