Apple plans to introduce a 23-inch iMac in the second half of 2020, with mass production set to begin in the third or fourth quarter, according to a China Times report spotted by Mac Otakara. Apple could likely achieve this display size by simply reducing the thickness of the bezels on the current 21.5-inch iMac. 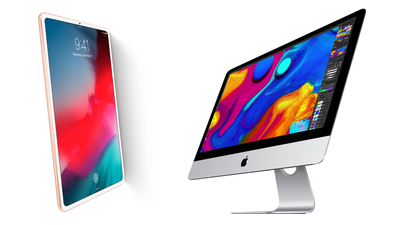 The report claims that the new iMac will be one of several lower-priced products that Apple introduces this year, including the new iPhone SE and a forthcoming 11-inch iPad, also expected in the second half of 2020. Apple currently offers 21.5-inch and 27-inch versions of the iMac, which was last updated in March 2019 with up to 8-core 9th-generation Intel processors and Radeon Pro Vega graphics options.

iMac pricing currently starts at $1,099, although it costs an additional $200 to upgrade from a spinning hard drive to an SSD.

As for the 11-inch iPad, it is not entirely clear if the report is referring to a new version of the 10.2-inch iPad or the 10.5-inch iPad Air. Last month, the anonymous Twitter account "L0vetodream" claimed that Apple is developing a new 11-inch iPad Air with Touch ID under the display, allowing for a nearly full screen, notch-less design.

That leak said the 11-inch iPad Air will have a Mini-LED backlit display. Apple is developing at least six other products with Mini-LED displays for release by the end of 2021, including a 12.9-inch iPad Pro, a 27-inch iMac Pro, a 14-inch MacBook Pro, a 16-inch ‌MacBook Pro‌, a 10.2-inch iPad, and a 7.9-inch ‌iPad‌ mini, according to analyst Ming-Chi Kuo.

Kuo has previously said that Mini-LED backlit displays will allow for thinner and lighter product designs, while offering many of the same benefits of OLED displays used on the latest iPhones, including good wide color gamut performance, high contrast and dynamic range, and local dimming for truer blacks.

Mass production of Mini-LED products could be delayed until 2021, according to the China Times.

iMac pricing currently starts at $1,099, although it costs an additional $200 to upgrade from a spinning hard drive to an SSD.

No one needs a spinning hard drive. No one.
Score: 42 Votes (Like | Disagree)

thejadedmonkey
Only Apple could call a $899 or $999 computer "cheap" and still have the "courage" to sell it with a spinning hard drive.
Score: 37 Votes (Like | Disagree)

brendu
Just by reducing the bezels they can likely keep the same overall product size and make 23” and 29” iMacs. If they offer a base model with a 256gb SSD and user upgradable ram for $999 I’d very seriously consider a new iMac. Not holding my breath on the ram though.
Score: 22 Votes (Like | Disagree)

otternonsense
What about that iMac? Apple hasn't given the iMac any redesigns for almost a decade. Only thing they did was photoshop the bezels last year to make them look slimmer.