The Apple Watch Series 6 will add blood oxygen monitoring to its features list when it's launched later this year, according to a new report from DigiTimes. 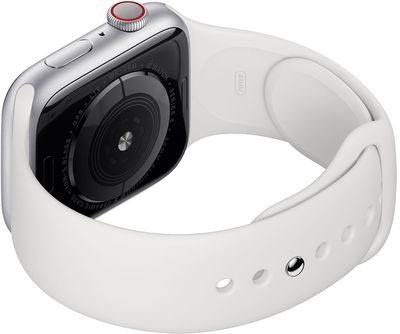 Apple Watch 6 will feature biosensors that can monitor sleeping conditions, detect blood oxygen and measure pulse rates, heartbeats and atrial fibrillation, and will also incorporate MEMS-based accelerometer and gyroscope, all allowing the new device to continue to lead in measurement precision among wearable devices, the sources said.

The Taiwan-based website's sources say that the next-generation Apple Watch has undergone "smooth development" thanks to close collaboration between Apple and Taiwanese company ASE Technology, which has obtained major backend orders for the device.

Leaked code found in iOS 14 has previously suggested Apple is working on an Apple Watch that can detect blood oxygen levels.

Based on the discovered code, Apple will provide notifications when blood oxygen levels drop below a healthy threshold, which is right around 95 to 100 percent saturation. A drop in blood oxygen level can suggest a serious respiratory or cardiac problem.

It was not clear from the code if the feature would be limited to new Apple Watch Series 6 devices or if it would come as a software update in watchOS 7, but today's report suggests it may be exclusive to the Series 6.

When the original ‌‌Apple Watch‌‌ was released back in 2015, iFixit actually discovered that Apple's heart sensors have the capability to monitor blood oxygen levels, but Apple has never activated it.

Other smartwatch and fitness tracker makers including Google-owned Fitbit already offer blood oxygen monitoring features in some of their wearable devices, so Apple is playing catch-up in the area, but that could mean the company has a more advanced implementation of the feature in the works.

Apple Watch Series 6 models, which are in development for a fall launch, are rumored to feature faster performance, better water resistance and improved wireless transmission for faster Wi-Fi and cellular speeds.

These improvements will be made in part through a rumored swap to liquid crystal polymer or LCP material for the flexible circuit boards expected to be included in the Apple Watch Series 6, according to Apple analyst Ming-Chi Kuo.

smythey
This addition is quite a big deal, especially in the context of COVID. A good Sp02 monitor costs around half the price of an Apple watch itself.
Score: 13 Votes (Like | Disagree)

Wait, does that mean sleep monitoring feature will be removed from all apple watches except series 6?

No? The article doesn't state that.
Score: 11 Votes (Like | Disagree)

Wait, does that mean sleep monitoring feature will be removed from all apple watches except series 6?

My guess is that basic sleep tracking functionality will be provided in all watchOS 7 AWs but the AW6 will probably support some advanced sleep tracking as a headline feature. Specifically:

* Use of the new blood oxygen sensor to do a simple form of sleep apnea tracking (akin to the simple EKG feature in AW4/5).
* Dedicated circuitry to ensure low-power modes of heartbeat/other sensors during sleep mode, which enables better data collection for advanced sleep tracking.
* Faster charging to make morning top-offs quick while getting ready for the day ahead.
* Apple will probably tout their magic algorithms developed by their health team to be best-in-industry.


These are just guesses because otherwise I don’t really know what else AW6 could offer other than standard speed and battery improvements. AW5 was already a sleeper update. Two years like that would be disappointing.
Score: 9 Votes (Like | Disagree)

ChromeCloud
I'm also hoping for the integration of the U1 Ultra Wideband chip found in the iPhone 11.
Score: 6 Votes (Like | Disagree)

michiemme
Thanks Apple... you're giving me a reason to spend (once more) some money...
Score: 6 Votes (Like | Disagree)
Read All Comments