A battery likely for the upcoming Apple Watch Series 6 has been filed at the Korea Testing and Research Institute and discovered by a Twitter user @yabhishekhd. 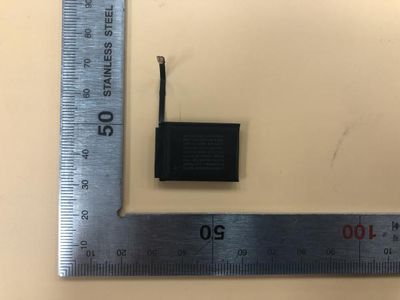 Certification for a 1.17Wh battery with a capacity of 303.8mAh was issued on June 23 by the KTR, a Korean regulatory body that approves and tests new hardware ahead of public sale.

A larger 303.8mAh in a new Apple Watch would offer a larger capacity than in previous generations. This could be facilitated by the removal of the Force Touch technology layer, which was made defunct in WatchOS 7. Without this component in future Apple Watches, internal space could be made available for a slightly larger battery.

Apple claims that Apple Watch Series 5 offers an 18 hour battery life, but since this new battery is only slightly larger, it would be unlikely for the Series 6 battery life to be considerably better. Any significant battery life improvements would be more likely to come from improved power efficiency rather than a larger battery.

Earlier this week, it was rumored that Apple Watch Series 6 could feature blood oxygen monitoring, which could consume more power and account for the need for a larger battery.

‌Apple Watch‌ Series 6 models are expected for a fall launch, and are rumored to feature faster performance, better water resistance, and improved wireless transmission for faster Wi-Fi and cellular speeds.

reallynotnick
That's 2.635% larger for those who are curious.
Score: 17 Votes (Like | Disagree)

Without this component in future Apple Watches, internal space could be made available for a slightly larger battery.

Have you actually seen the size of the Force Touch sensor? It has no impact on battery size. It's a thin, elastic cable around the display.

It’s really 2.5 days with regular use honestly. Anyone seeing only 1 day is using GPS and cellular a ton. I find the battery life to be more than adequate.

Mine is usually around 50% when I go to bed. I wouldn’t get through a 2nd day. I don’t consider myself a heavy user, but I’m not going to turn off useful features to try and squeeze a 2nd day of battery life out. If I wanted to do that, I’d buy a watch with fewer features.
Score: 7 Votes (Like | Disagree)

Well that’s a relief. I was gonna be jealous if I had bought the last generation of 1 day battery life.

It’s really 2.5 days with regular use honestly. Anyone seeing only 1 day is using GPS and cellular a ton. I find the battery life to be more than adequate.
Score: 5 Votes (Like | Disagree)

jlocker
Well it is amazing that my Apple Watch 1.0 is still running today after all the years I have owned from the original release of the watch with the same battery. But it is time to upgrade to Apple Watch 6 this fall :)
Score: 3 Votes (Like | Disagree)

There is still time to be amazed come September.

As to battery life, I am going to expect the same battery life as my series 5.
Score: 2 Votes (Like | Disagree)
Read All Comments