Apple today seeded new public betas of upcoming iOS 14 and iPadOS 14 updates to its public beta testing group. Today's software releases, which Apple labels as fifth betas to keep them in line with developer betas, are actually the fourth betas that Apple has provided to public testers and they come two weeks after the prior beta releases. 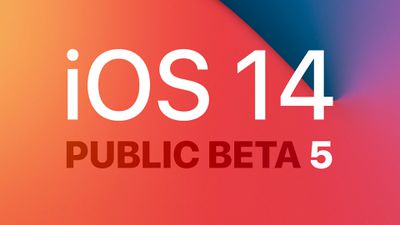 Public beta testers who have signed up for Apple's beta testing program can download the iOS/‌iPadOS‌ 14 updates over the air after installing the proper certificate from the Public Beta website on an iOS device, with instructions available in our how to.

Beta 5 for developers introduced a larger Apple News widget option, a scrolling clock wheel for apps like Alarm Clock, an option to turn on Exposure Notifications, and a feature to better hide photo albums, and these new additions are also available in today's public beta.

That was an assumption on previous versions of Apple Watch. Apparently they have changed that.

And no reason for a thumbs down on my original post.

This has never been an assumption. I've ran betas every year and this is the first year a public beta for the AW was even offered.
Score: 8 Votes (Like | Disagree)

I'd love to try out the beta, but since I have AW I would have to use the beta on the watch too. The phone I can downgrade, can't do that with the watch. :(

You don't have to use the beta on the Apple Watch just because your phone is on the beta.
Score: 6 Votes (Like | Disagree)

Nütztjanix
It's the other way round. If you want to use watchOS Beta, your phone has to be on the corresponding iOS Beta, too.
Score: 6 Votes (Like | Disagree)

I'd love to try out the beta, but since I have AW I would have to use the beta on the watch too. The phone I can downgrade, can't do that with the watch. :(

You don’t have to go beta on the AW. I haven’t.
Score: 5 Votes (Like | Disagree)
Read All Comments