Apple in the second quarter of 2020 paid Samsung approximately $950 million for not meeting OLED panel purchase goals established in agreements between the two companies, according to display analysts at Display Supply Chain Consultants. 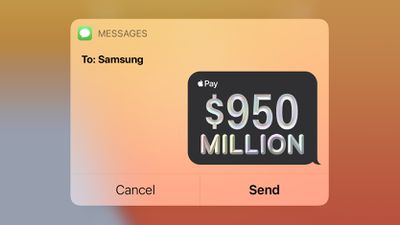 Samsung last week shared guidance on revenue and operating profit for the second quarter of 2020, which included a one-time gain related to its display business. The one-time payment is believed to be from Apple, caused by Apple purchasing fewer than expected OLED panels for smartphones during the second quarter of the year.

Samsung reported that its estimate of operating profit included a one-time gain related to its display business, according to a report at wsj.com, but did not disclose the amount. Last week theelec.net reported that Samsung Display is believed to have received KRW 900 billion from Apple for purchasing fewer OLED smartphone panels than required, but DSCC sources suggest that the payment is closer to US$950 million.

During Apple's third fiscal quarter, or second calendar quarter, many of its retail stores in the United States in other countries around the world were closed for several months, which, along with economic uncertainty, likely had a major impact on sales. Even now, many stores in the U.S. have been forced to close again as coronavirus outbreaks have continued to spike.

The payment suggests Apple did not meet projected iPhone sales and thus did not order the number of OLED panels from Samsung that it expected to need, requiring the Cupertino-based company to compensate Samsung. Apple in April reported revenue of $58.3 billion, up from $58 billion in the year-ago quarter, but the company declined to provide guidance for the third fiscal quarter of 2020 due to the instability caused by the ongoing health crisis.

Apple plans to announce earnings for the third fiscal quarter (second calendar quarter) of 2020 on Thursday, July 30, which will give a better picture of how ‌iPhone‌ and other product sales fared during the prolonged store closures.

Apple also made a $683 million payment to Samsung in July 2019 after missing OLED display purchase targets due to poor sales in China and other parts of the world in the 2018 holiday quarter. Apple addressed those issues with ‌iPhone‌ trade-in promotions, price cuts, and monthly payment options, which boosted sales until the coronavirus hit at the beginning of 2020.

kyleh22
there's no act of god clause in there?! insurance companies have been using that BS for years...
Score: 13 Votes (Like | Disagree)

Zen_Arcade
A contract at work.

I am surprised Apple didn’t try to negotiate (read “dictate”) downward with a conditional future offer.
Score: 12 Votes (Like | Disagree)

AppleShareholder
Unbelievable! Samsung is killing Apple's margins! Apple better do something quick and improve margins or shareholders will revolt! Go back to LCDs if they have to! I don't care. Just bring your display margins down!
Score: 10 Votes (Like | Disagree)

JPack
Maybe now some people will understand why Apple signed up LG and BOE for OLED.
Score: 10 Votes (Like | Disagree)

asdavis10
No "act of God" clause?
Score: 10 Votes (Like | Disagree)
Read All Comments