Ireland's Data Protection Commissioner (DPC) is "in contact" with Apple after a former Apple contractor asked the DPC to investigate Apple's practice of allowing employees to listen to Siri recordings, reports Reuters. 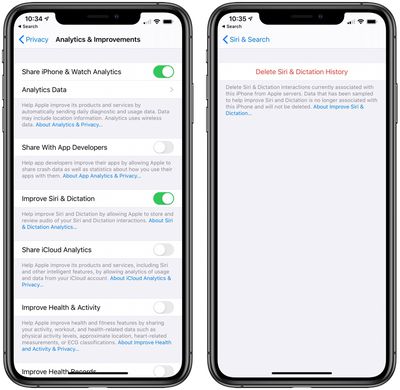 The contractor, Thomas Le Bonniec, requested the assistance of the DPC in May and called for greater protection under the EU's privacy laws.

DPC Deputy Commissioner Graham Doyle said that the DPC "engaged with Apple" when the ‌Siri‌ issue first arose last year, and Apple "made some changes," but now the DPC has additional questions.

"However, we have followed up again with Apple following the release of this public statement and await responses," he said, in reference to the letter. "In addition, it should be noted that the European Data Protection Board is working on the production of guidance in the area of voice assistant technologies."

Last July, contractors working on ‌Siri‌ quality control told The Guardian that they were listening to Siri audio recordings for Apple and regularly heard sensitive information that Apple device owners might not want shared, even with the data anonymized.

Apple came under fire for concealing the quality control practice and not making it clear to customers that some ‌Siri‌ recordings are listened to by employees for quality control purposes.

Apple in August 2019 ultimately suspended its Siri quality control program to overhaul how it works. Later in August, Apple ended all transcription and voice grading work done through contracting companies.

Along with further scrutiny from Irish regulators, Apple is facing a class-action lawsuit for allowing contractors to listen to and grade the anonymized ‌Siri‌ conversations for quality control purposes.

Google and Amazon do whatever they want but the minute Apple does it oh no.

No, that really isn't how the world works. (Not outside of ConspiracyWorld, anyway.)
Score: 2 Votes (Like | Disagree)

russell_314
This is why Siri will always suck. Google and Amazon do whatever they want but the minute Apple does it oh no.

Websnapx2
So, by the article's own admittance:

Ireland's Data Protection Commissioner ('https://www.dataprotection.ie') (DPC) is "in contact" with Apple after a former Apple contractor asked the DPC to investigate Apple's practice of allowing employees to listen to Siri recordings

Would that not mean that the "former Apple contractor" would no longer be privy to what apple is doing since they have not been involved since August? What could they possibly know in regards to how things are done now if they are no longer involved and the process has since changed?

I am all for a governing body putting in legal protections so that we can hold accountable anyone who oversteps common sense privacy restriction... I just don't see how a former contractor can shed light on policies enacted after they were no longer involved.
Score: 1 Votes (Like | Disagree)

No, that really isn't how the world works. (Not outside of ConspiracyWorld, anyway.)

Finally someone in here with common sense. After I saw how many Likes that harebrained comment got I was about to give up on reading further until I saw this.

Google has almost permanently been at odds with UK, European, Asian, Indian etc etc regulators for over a decade now. They have been involved in countless privacy scandals, had heavy fines levelled at them, and had to change their policies to fit different markets. Their legal team and backlog is vast.

Apple has had very little by way of privacy concerns in comparison.

How anyone actually living on planet earth could be unaware of that, especially if you're posting on a tech site (and I'm assuming interested in tech news), you should have at least half a clue.

And Amazon, seriously? Amazon? It's a virtual conveyor belt of privacy faux-pas.

now i see it
I honestly don't know what Siri is anymore. It's linked to every app and integrated in all the search menus.

Is Siri now search?
It used to be a separate entity in previous versions of iOS but has morphed into who knows what in later versions.

There's so many toggles to it in settings now along with app links - that it's become overwhelmingly suspicious.

I just turn off every reference to it wherever I find it. Apple blew it
Score: 1 Votes (Like | Disagree)

jakebro
There is a lot of information missing from this article.

From May to July 2019, Thomas Le Bonniec was hired by Globe Technical Services (GTS), a subcontractor for Apple in Cork, Ireland, to transcribe recordings from Apple devices in France. (Apple has other subcontractors in cities such as Paris, France and Barcelona, Spain.)

During that time, Le Bonniec says that he transcribed hundreds of clearly unintentional recordings every day as part of the Bulk Data Team. Those transcribed recordings were then linked to people's data by the Development Data Team.

Le Bonniec says that the recordings that he transcribed included information about people's children (including their education); health and medication; religious and political beliefs; and sexuality and pornography.

Despite all of that information being considered “sensitive” under EU law and having the most protection, neither Apple nor GTS have been investigated.

Therefore, on 20 May 2020, Le Bonniec formally requested that the European Data Protection Board and its members (which includes the Data Protection Commissioner in Ireland) investigate Apple and “other tech companies following the same practices” (such as Google and Amazon).

Le Bonniec acknowledges that his request breaches a non-disclosure agreement and implies that he knows that Apple has not changed its practice since it became public last year.
Score: 1 Votes (Like | Disagree)
Read All Comments