This week saw a couple of big announcements, led by the launch of an update for the 13-inch MacBook Pro line. Most notably, the update brought the improved Magic Keyboard previously introduced on its 16-inch sibling and the MacBook Air, with high-end models also receiving updated processors.

Subscribe to the MacRumors YouTube channel for more videos.
The second significant announcement this week was that Apple's first all-digital Worldwide Developers Conference will kick off on June 22. Other news this week included a firmware update for the AirPods Pro, an update on Apple's Mini-LED efforts, and more.

Read on below and check out our video above for recaps of all of this week's most important stories!

Apple this week refreshed its 13-inch MacBook Pro lineup, with key features including the same Magic Keyboard as the 16-inch MacBook Pro, up to 80 percent faster Intel graphics than the previous generation, up to 32GB of RAM, up to 4TB of SSD storage, and 6K display support. 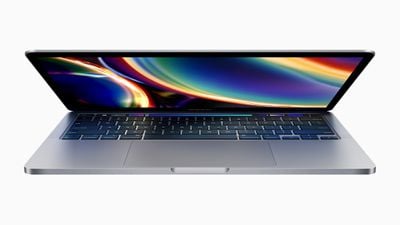 10th-generation Intel processor options are only available on higher-end models, with the $1,799 configuration proving to be up to 16.5% faster than the $1,299 base model with an older 8th-generation processor.

Apple's Virtual WWDC Event to Kick Off on June 22

Apple has announced that its first-ever online-only WWDC will begin Monday, June 22 via the Apple Developer app and website. The weeklong event will include a virtual keynote, sessions, and labs, with more details to be shared in June. And it's free!

Student developers from all over the world can enter Apple's Swift Student Challenge by creating an interactive scene in Swift Playgrounds that can be experienced in three minutes. Winners will receive an exclusive WWDC20 jacket and pin set. Submissions are open through May 17.

In recent months, some AirPods Pro owners have been complaining about reduced noise cancellation and crackling or static sounds, so users have listened for any improvements following the update.

Perhaps proving how subjective sound quality can be, feedback has been decidedly mixed, with some users noticing an improvement, some noticing no change, and some noticing further degradation to noise cancellation.

Apple has offered some help in the form of two new support documents for users to troubleshoot noise cancellation or crackling sound issues.

10 Tips and Tricks for the iPad Pro Magic Keyboard

Have you recently picked up a new Magic Keyboard for the iPad Pro? Here's a list of our favorite tips and tricks that you need to know.

The tips and tricks relate to adjusting the backlight brightness, customizing the cursor's behavior, enabling tap-to-click on the trackpad, other trackpad gestures, accessing the Emoji keyboard, and more.

Disappointed that the new 13-inch MacBook Pro was not the rumored 14-inch model? That may be due to a slight delay in Apple's plans to release a range of new products with Mini-LED backlit displays.

Amid rumors that Apple is working on a digital "CarKey" feature for iPhone, the Car Connectivity Consortium has announced that its NFC-based Digital Key Release 2.0 specification has been finalized and made available to its members, which includes Apple.

"CarKey" will allow an iPhone or Apple Watch to unlock, lock, and start an NFC-compatible vehicle. Just like credit cards and boarding passes, users will be able to add a digital car key to the Wallet app, eliminating the need to use a physical car key or key fob.