Earlier this week, screenshots of what appears to be the CarKey interface surfaced on Twitter, providing us with our first look at the upcoming feature. 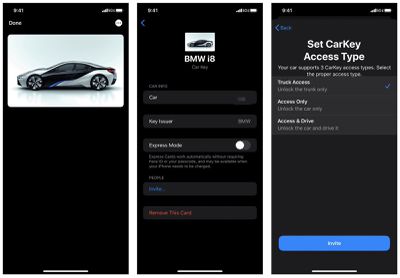 Source: DongleBookPro
As expected, a digital car key appears as a card in the Wallet app. Tapping on the card reveals info such as the car model, issuing automaker, a toggle switch for Express Mode, and an option to share a car key with other users. When sharing a car key, the primary user can provide others with three levels of access, including the ability to unlock the trunk only, unlock the vehicle, or unlock the vehicle and drive it.

MacRumors uncovered that users will be able to share CarKeys using the Messages app. Shared access to CarKeys can be permanent for trusted individuals, such as a family member or friend, or temporary for someone like a valet driver.

It appears that Apple will be partnering with automakers for this initiative, suggesting that CarKey could roll out in a similar manner as CarPlay. Based on the screenshots above and iOS code strings seen by MacRumors, it looks likely that luxury car brand BMW will be one of the first automakers to support the feature, as 9to5Mac noted earlier.

BMW teased the future of digital keys in a press release last year:

Today, it is already possible to lock and unlock the vehicle, start the engine and share the key with others using the BMW Digital Key as part of BMW Connected on the smartphone. But this is only the first step in a global technological transformation being shaped and led by the BMW Group.

Apple is a member of the Car Connectivity Consortium, which recently announced an NFC-based Digital Key 2.0 specification that it said would be made available by the end of 2019. The consortium said this specification establishes a secure connection between mobile devices and vehicles using NFC, even when a compatible device's battery is low.

Next, the consortium is developing a Digital Key 3.0 specification based on both Bluetooth LE and Ultra Wideband to enable passive, location-aware keyless access. This would allow you to leave your iPhone in your pocket or backpack when accessing or starting your vehicle. iPhone 11 models are equipped with an Apple-designed U1 chip with Ultra Wideband support, so Apple could choose to offer this functionality.

It is unclear when Apple plans to make CarKey available to the public. The feature is not activated in iOS 13.4, released earlier this week. CarKey could be introduced in a future update to iOS 13 or held until iOS 14, which should be previewed in June.

ersan191
Idk about these screenshots, it’s not like Apple to misspell “trunk”. Spacing is all messed up too.

“Express mode” is a terrible name and the description just makes it even more confusing.

These are pretty obviously fake.
Score: 9 Votes (Like | Disagree)

Led-zep
Finally have a reason to drive my I8
Score: 8 Votes (Like | Disagree)

incoherent_1
I really really hope this feature gets extended to all NFC keycards and fobs for accessing buildings too.
Score: 4 Votes (Like | Disagree)

1. Why isn't this in all cars already?! Cmon Apple, BMW first? For real? How about you pick a company that starts with a more blue collar kind of demographic?

Probably because that's who was willing to work with them early.

I own the "least BMW BMW" - the funky city electric i3. I'd love to have this, but knowing BMW, it certainly won't be coming to existing vehicles, only new ones. (I mean, they charged an annual fee to use CarPlay until just a couple months ago.)
Score: 3 Votes (Like | Disagree)

now i see it
Finally. Using an actual key has been such a burden for 70 years
Score: 3 Votes (Like | Disagree)

BWhaler
I want this to come to the Apple Watch. That would be amazing.
Score: 2 Votes (Like | Disagree)
Read All Comments