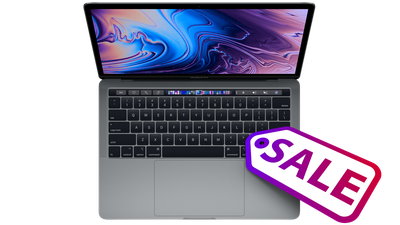 Note: MacRumors is an affiliate partner with Woot. When you click a link and make a purchase, we may receive a small payment, which helps us keep the site running.

You'll also get a one year Woot Warranty with purchase of the MacBook Pro. Woot notes that the notebooks have been repaired by professionals to be in proper working order, and they will come in a generic white box with Apple's USB-C power adapter and charge cable.

Woot is owned by Amazon, so Amazon Prime members can also get free shipping on all Woot orders. Be sure to visit Woot's homepage to shop for more flash deals, today including the LG Ultrafine 5K Monitor and Soundbar.

Blackstick
No magic keyboard, no sale ?
Score: 5 Votes (Like | Disagree)

Most people were buying 30~40GB mechanical hard drives back in those days. The first MacBook Air had the option of a 64GB/128GB SSD in 2008, seven years later.

Also, even at this price, it still has the butterfly keyboard. No sale.
Score: 5 Votes (Like | Disagree)

I doubt most people would have even fathomed a 128GB solid-state drive in 2001, let alone expected one as a base configuration in a 13" laptop.
Score: 4 Votes (Like | Disagree)

colsandurz
So if the butterfly keyboard breaks will Apple fix it for free?
Score: 3 Votes (Like | Disagree)

Those are "refurbished" units. So, when the keyboard stops working, who do you call?