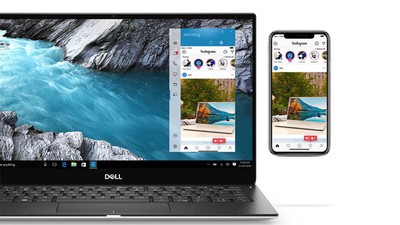 Version 3.0 of the app lets users control their phone with their PC's touchscreen, keyboard and mouse, which also enables drag and drop for photo and video files to transfer them between devices.

In addition to screen mirroring, the update includes Windows support for taking and making iPhone calls handsfree, text messaging, notifications, contacts search, and more when paired with an ‌iPhone‌.

The Dell Mobile Connect PC app has a few requirements: The Dell laptop needs to be a 2018 model or later with Bluetooth, and the supported Dell laptop ranges include XPS, Inspiron, Vostro, Alienware, and the G Series.

The Dell Mobile Connect app is a free download for ‌iPhone‌ available on the App Store. [Direct Link]

AlliFlowers
It would be nice if this were supported by Windows in general.
Score: 12 Votes (Like | Disagree)

Microsoft rolls out updates smoothly on a pretty regularly basis... stuff working as intended doesn't warrant writing an article, thus why you don't hear about it.
Score: 6 Votes (Like | Disagree)

iRutherford
I swear this is the next app to be yanked off the App Store. You heard it here first!
Score: 5 Votes (Like | Disagree)

djrm
Wow!! Why the hell is this not available on Mac devices!! Killer app
Score: 5 Votes (Like | Disagree)

Just install it - it will work. I'm running it on a Huawei Matebook X Pro paired with my XS Max. No problem.

I installed the PC app via the Microsoft App Store. It said it was incompatible but allowed the install anyhow. Prompted for the mirroring drivers, I then restarted the Dell PC app to pick the drivers up and I'm mirroring my iPhone on my Huawei laptop.

It's a kludge using Accessibility / touch control and screen broadcasting to work, but it works well enough. Nice to have iMessage up on my 28" 4K screen with my mouse and keyboard available to respond to messages.

Just make sure your phone is sitting on a dock pointed at you, for Face ID recognition. Mine sits on a Qi charging base angled at me perfectly. I don't even have to look at it to log into different apps.

There are somethings very wrong about this. The fact that the Mac can't do it, is one very wrong thing. Another one is that it's Windows. Another that it's Dell. Another is the idea that a somebody using Windows would be using an iPhone.

So should I snap a pic of my iPhone XS Max mirrored on my Huawei Matebook X Pro - really push you over the edge?

Why can't Microsoft accomplish this, does this require hardware? From the link it looks like it just uses Bluetooth, maybe it requires a newer version of Bluetooth? I've always wanted to use Windows phone connect option but it only works on Android (the only function available for iphones is transferring web pages). Dell's app is exactly what Microsoft should have inside of Windows, would be nice to use something like this on a non Dell PC, I'd gladly pay for it.

Works just fine on non-Dell laptops. Installed it today on a Huawei Matebook X Pro and my XS Max. Working as designed. Full mirroring, alerts etc. although 90% of the alerts on my phone are already set up on my Windows laptop, so I get double/triple alerts (Chrome, Windows and now this Dell Mobile Connect all triggered from the same event).
Score: 4 Votes (Like | Disagree)
Read All Comments

Saturday July 4, 2020 9:44 pm PDT by MacRumors Staff
iPhone 12 dummy models based on leaked schematics have been starting to circulate online and in online marketplaces. Not happy with the circulating size comparisons between the rumored 5.4" iPhone 12 and the original iPhone SE models, MacRumors forum user iZac took matters into his own hands and purchased his own 5.4" dummy model to provide more detailed size comparisons between the original...
Read Full Article • 172 comments

Saturday July 4, 2020 6:00 am PDT by MacRumors Staff
With WWDC now behind us, our attention this week largely turned back to rumors, led by increasing claims that Apple controversially won't be including a power adapter in the box with the iPhone 12. We also saw a few other iPhone 12 rumors, signs of an upcoming iMac update, and some more information on timing of updates for Apple's smaller iPads. The other big topic this week was Apple's...
Read Full Article • 34 comments

Wednesday July 1, 2020 3:40 am PDT by Tim Hardwick
As expected, Apple's first MacBook Pro with a Retina display is now officially classed as "obsolete" worldwide, just over eight years after its release. In a support document, Apple notes that obsolete products are no longer eligible for hardware service, with "no exceptions." This means that any mid-2012 Retina MacBook Pro 15-inch models still out there that require a battery or other...
Read Full Article • 204 comments

Friday July 3, 2020 1:56 am PDT by Tim Hardwick
Apple's upcoming "iPhone 12" will feature "high-end" lens arrays in the rear camera to improve image quality, according to respected analyst Ming-Chi Kuo. In a new research note seen by MacRumors, Kuo says Largan will supply the premium camera lenses to Apple for the phones from mid-July, although Apple has received the same components slightly earlier in the last couple of years....
Read Full Article • 46 comments

Thursday July 2, 2020 3:03 am PDT by Tim Hardwick
Apple is rumored to be releasing a mini LED-backlit iPad Pro and a new mini-LED MacBook Pro series over the next 18 months, and the devices have just picked up two new suppliers, according to industry sources. DigiTimes today reports that two former Apple suppliers, Taiwan's Zhen Ding Technology and Flexium Interconnect, have entered the supply chain to make the flexible printed circuit...
Read Full Article • 40 comments

Wednesday July 1, 2020 10:48 am PDT by Juli Clover
Benchmarks for an unreleased iMac equipped with a 10th-generation Core i9 Intel Comet Lake-S chip and an AMD Radeon Pro 5300 graphics card have surfaced, giving us an idea of what we can expect from a refreshed 2020 iMac. The Geekbench benchmarks, which appear to be legit, were found on Twitter and shared this morning by Tom's Hardware. The iMac in the benchmarks would be a successor to the...
Read Full Article • 231 comments

Friday July 3, 2020 1:08 pm PDT by Juli Clover
iOS 14 introduces a feature that alerts users when apps access their clipboards, and tons of apps have been caught clipboard snooping. LinkedIn is one of the iOS apps that has been reading user clipboards, and iPhone owners have complained that the app copies the contents of the clipboard with every keystroke. LinkedIn is copying the contents of my clipboard every keystroke. IOS 14 allows ...
Read Full Article • 138 comments