Today Would Have Been Apple Co-Founder Steve Jobs' 65th Birthday

Apple co-founder and former CEO Steve Jobs was born on February 24, 1955, and had he not passed away in 2011 at the age of 56, today would have marked his 65th birthday. Jobs founded Apple alongside Steve Wozniak in 1976, and he was at the forefront of the personal computer revolution with machines like the Apple 1, Apple II, and the original Macintosh with its now-iconic name. 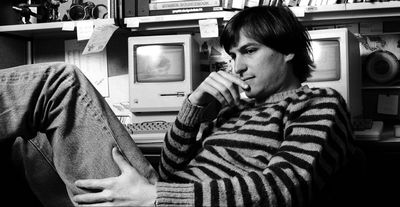 Jobs was ousted from Apple in 1985 after disagreements with then-CEO John Sculley, and after his departure, Apple struggled and was on the brink of failure. Jobs returned to Apple in 1997 after his company, NeXT, was acquired, and he proceeded to lead the company to the wild success that it enjoys today.

Many of Apple's most important products were developed under Jobs' leadership, including the iPod, iPhone, iPad, iTunes, the App Store, the MacBook, the iMac, and more. and his design philosophies and drive for perfection continue to shape Apple even nine years after his death.

Apple CEO Tim Cook has often said that Jobs' DNA - his taste, his thinking, his dedication to hard work, and his lust for innovation - will "always be the foundation of Apple."

There is not a single Apple product on the market that has not been influenced by Steve Jobs, and that even extends to many non-Apple products. Smartphones today look the way they do because Steve Jobs led the development of the all-screen no-keyboard ‌iPhone‌ in 2007.

Millions of lives have been improved by Apple devices, and Apple's iPhones, iPads, and Macs are some of the most popular products on the planet. Apple has more than 1.5 billion active devices around the world, which is astounding, and there are always new and exciting projects on the horizon.

New iPhones are released on a yearly basis, iPads are now as powerful as computers, Macs get better with each iteration, and Apple is working on intriguing future technology like AR/VR headsets and even a car.

As always, Apple fans around the world will celebrate Steve Jobs and all of his accomplishments today, and we can also expect to hear from Apple executives like ‌Tim Cook‌, who often honors Jobs on his birthday.

otternonsense
I miss his wit, relentlessness and visionary products. Apple's current leadership may have created an empire but Apple's creative soul was forever lost with Steve's passing. RIP!
Score: 19 Votes (Like | Disagree)

spyguy10709
... because the people who are crazy enough to think they can change the world, are the ones who do.

giebe
Still a huge lost for all of us. I wonder what he would have come up with. He will always live forever as a modern legend.
Score: 11 Votes (Like | Disagree)

fairuz
Jobs deserves to be celebrated. Apple had plenty of great leaders and top-tier engineers both times he was CEO, but it wouldn't have mattered without him at the helm, and hardly anyone else could have done it – twice. I can only think Elon Musk maybe, except he was much younger.
Score: 7 Votes (Like | Disagree)
Read All Comments