The first foldable smartphone from Samsung, the Galaxy Fold, had major durability issues that caused its launch to be delayed. Samsung's newest foldable device, the Galaxy Z Flip, seems to be faring a bit better so far, but there are some complaints about the build quality and problems with the display. The same is true of Motorola's latest smartphone, the RAZR. 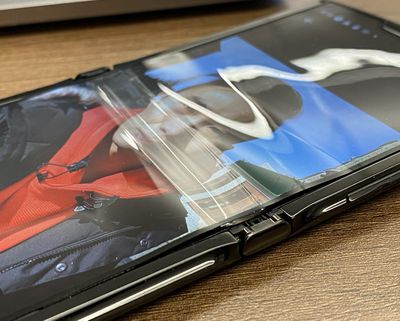 Motorola RAZR foldable smartphone, image via Ray Wong
Over the weekend, YouTuber JerryRigEverything tested the durability of the Galaxy Z Flip's display, which is made of a bendable "Ultra Thin Glass" for the first time rather than the plastic material used for the Galaxy Fold.

The testing suggests that the display of the Galaxy Z Flip scratches like plastic and isn't resistant to scratching or other damage. A fingernail on the display was able to make a permanent dent, which is concerning for a smartphone that costs $1,380.


In response to that video, Samsung told CNBC in a statement that the display should be "handled with care" and that it has the same protective layer used in the Galaxy Fold, which perhaps explains some of the scratching.

Another Samsung Galaxy Z Flip user on Twitter got his smartphone, opened the box, opened the phone, and then had it crack right down the middle. He suggests that it could have been due to cold weather.

Image via Twitter
Cracking at the fold was a problem that plagued the Galaxy Fold, and Samsung does warn against pressing hard on the screen and making sure there's nothing on the screen when it's folded closed, but a crack down the middle right out of the box is unexpected behavior.

The $1,500 Motorola RAZR, another foldable smartphone that came out in February, is also seeing durability issues. Ray Wong from Input over the weekend said that the site's Motorola RAZR has a display that's peeling apart just a week after it was purchased.

I'm too scared to even fold up the phone now because the more I close it the wider the spread gets. There's a long streak across the top of the bubble and at first glance, you might mistake it for a scratch. It's not a scratch; there's no physical damage on the surface of the lamination. It's literally the pixels splitting from the two layers.

The damage is more than just cosmetic - the touchscreen is broken and the warping on the surface makes touches and taps unresponsive. Wong isn't sure what caused the damage, but as with the Galaxy Z Flip crack, he speculates that it could be related to cold temperatures.

There have been a few rumors suggesting Apple is working on foldable display technology, but given the super high price points of foldable displays and the ongoing durability issues that have impacted every foldable smartphone to date, Apple may be planning to hold off on a foldable iPhone.

Apple in early February shared a patent for a foldable device with movable flaps to prevent the display from creasing, and that's the latest that we've heard about an Apple device with foldable display technology.

Interestingly, Apple has also separately patented a self-heating display for a foldable device to prevent damage in cold weather, which seems to be a significant issue for foldable devices at the current time.

Of course, Apple patents a lot of technologies that don't ever come to fruition, so whether or not these patents and other related patents hint at Apple's work on a foldable ‌iPhone‌ remains to be seen. At the current time, there are no rumors indicating a folding ‌iPhone‌ is something that we can expect to see in the near future, and certainly not in 2020. The 2020 iPhone lineup will be similar to the 2019 ‌iPhone‌ lineup, though Apple is planning to implement new technologies like 5G connectivity and 3D cameras.

IAmGLaDOS
So many companies trying to be first to make a worthwhile foldable, and yet it remains a solution in search of a problem.
Score: 68 Votes (Like | Disagree)

thisisnotmyname
who's surprised by this?
Score: 47 Votes (Like | Disagree)

Motionblurrr
bUt aPpLe doesn't HaVe a FoLdAbLe
Score: 46 Votes (Like | Disagree)

sshambles
Gee, what a shocker! A truly odd event that no one could have predicted ?
Score: 31 Votes (Like | Disagree)

TravelsInBlue
On a related note, I don’t understand the people who complain about the iPhone “not being innovative enough.”

It’s a mature market, of course everything we see now is going to be iterative.

Foldable phones are change for the sake of change. It doesn’t add ease of use or anything of value.
Score: 29 Votes (Like | Disagree)
Read All Comments