The foldable smartphone era is in full swing with the recent introductions of the Samsung Galaxy Fold and Huawei Mate X, and while it remains unclear if Apple will follow suit, the company has at least explored ideas related to foldable smartphones in patent applications over the past few years. 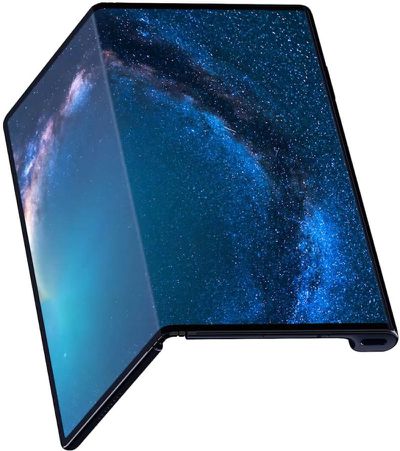 Huawei Mate X
In a patent application published by the U.S. Patent and Trademark Office today, titled "Electronic Devices With Flexible Displays," Apple explains that foldable smartphone displays could be prone to damage when bent in cold temperatures, and describes various heating methods to mitigate the issue.

For example, Apple says the portion of the display that bends could be heated by lighting up the pixels in that area of the screen. Alternatively, a "heating element or other heating structure" could be used, although Apple wasn't specific.

Apple's illustration of a folding device, along with an expanded view showing the bendable area of the display being heated
The patent application, highlighted by AppleInsider, notes that the foldable smartphone could have a magnetic latching mechanism that would prevent the device from being folded or unfolded in very cold temperatures to avoid damage to the display. This would be in environments "significantly below room temperature."

Apple files numerous patent applications every week, of course, and many of the inventions do not see the light of day. Patents are also very detailed, encompassing many possible ideas, even ones that Apple might not have any plans to advance. So, the exact implementation if any remains to be seen.

While unique, early foldable smartphones from Samsung and Huawei are far from perfect, with bulky designs and expensive price tags. Apple is unlikely to release a foldable iPhone unless it can meet the company's strict quality standards.

Last year, Bank of America analyst Wamsi Mohan predicted that Apple is working on a foldable iPhone for release in 2020, while an earlier Korean report said Apple was developing a foldable iPhone alongside LG. However, it's still not entirely clear if Apple will ever proceed with those plans.

TroyJam
Am I the only person wondering why we need foldable iPhones?
Score: 30 Votes (Like | Disagree)

G5isAlive
This is the kind of attention to detail that I doubt you will find in the Galaxy Fold. But yet, people will still say Apple doesn't do enough.
Score: 28 Votes (Like | Disagree)

Tarantularock
While I appreciate the novelty of a folding screen, I'm still having doubts that there is that much demand for a product like this.
Score: 22 Votes (Like | Disagree)

testcard
Heating element. In a smartphone. What could possibly go wrong?
Score: 20 Votes (Like | Disagree)

gaspitsjesse
I sincerely hope that folding phones (pholds) do not become the norm and stay explicitly niche.
Score: 17 Votes (Like | Disagree)
Read All Comments