Samsung first unveiled the smartphone on Sunday with a commercial that was shown during the Oscars, but the full announcement includes additional details about the device.


The major selling point for the Galaxy Z Flip is its small size, as it can fold in half and be tucked into a pocket. When folded out, it features a 6.7-inch Infinity Flex AMOLED display that's full screen with the exception of a small camera cutout at the top. Samsung says that the Z Flip is its first ever smartphone with a 21.9:9 ratio, and that the display is made from bendable "Ultra Thin Glass." 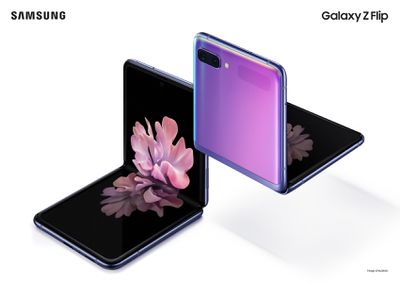 There's a Hideaway Hinge, which Samsung calls a "work of engineering art," with the hinge able to withstand 200,000 folds. The hinge uses a sweeper technology that includes nylon fibers to repel dirt and dust, a problem that affected Samsung's first foldable smartphone.

The phone can be used folded out into a traditional smartphone shape, but it can also be used folded in half similar to a makeup compact with the bottom half propping up the top half for a hands-free mode.

When folded in half, the Z Flip is in "Flex Mode," with an interface optimized for a hands-free selfie and vlogging experience using the 10-megapixel front-facing camera. Because the Galaxy Z Flip can hold its position at multiple angles, Samsung says it can capture "amazing low angle" photos that "play with perception" using the rear camera.

A Multi-Active Window feature allows users to multi-task by opening up the Multi-Window Tray to drag and drop the apps they want to use. One app can occupy each half of the Z Flip.

There's a small display on the back of the smartphone so that when it's folded up, users are still able to see the time, incoming notifications, and other relevant information. Tapping a notification on the cover screen will transition to the app while unfolding the phone.

Samsung included a dual battery inside the Galaxy Z Flip with a 3,300mAh capacity. That doesn't quite match the battery life of the S20 series, but Samsung says it will "last all day long."

Samsung says that the Galaxy Z Flip will be available in limited quantities in Mirror Purple and Black starting in the U.S. and Korea on February 14, 2020, followed by Mirror Gold in select countries. Pricing starts at $1,380.

Gimmicky and over priced, but interesting to see if they’ve gotten any better at this since last time.

Apple is going to release a ton of new emojis and watch bands in response.
Score: 11 Votes (Like | Disagree)

andiwm2003
If this works and is reliable then i like it. Looks very compact when folded. The price is high right now but not outrageous. I could imagine that this is below $1000 in a few years. I would like a iPhone like that.
Score: 11 Votes (Like | Disagree)

Nimoy
I don't really understand what problem this design is solving.
Score: 10 Votes (Like | Disagree)

What is the limit of times that I can open and close the device? lol

metalsiren
I know people here are knocking this, but its GLASS, not plastic... GLASS. thats amazing just think of future possibilities.

now this is not for me , but something like the fold that could unfold into a small tablet and with GLASS, then call me interested.
Score: 9 Votes (Like | Disagree)

benshive
Nothing new. I had one of these years ago :p