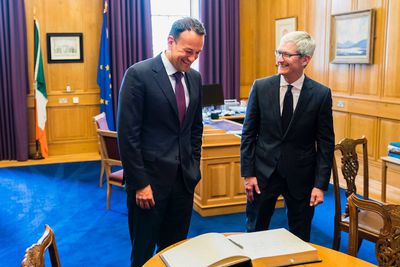 Cook is scheduled to meet with the Irish Taoiseach in Dublin on January 20 to receive the award, "in recognition of the iPhone maker’s 40 years of investment in Ireland," according to IDA Ireland, the country's investment agency.

Apple's business relationship with Ireland has faced significant opprobrium in recent years. In 2016, the European Commission found that the company received illegal state aid from Ireland.

Apple and Ireland both appealed the ruling, but the European Commission opened litigation against Ireland in October 2017 for its failure to procure Apple's back taxes.

Apple has already finished paying the $13 billion in back taxes it owes. If the order is eventually overturned, the money will be returned to Apple.

In 2018, Apple abandoned plans to build a $1 billion data center in Ireland after facing significant pushback from local residents concerned about its potential effects on local animals as well as arguments over its proximity to a shut-down nuclear power plant in Wales.

Apple's European headquarters are located in Cork, and last year it expanded the campus with a new building that provides space for an additional 1,400 employees.

Apple's European Job Creation page reveals that it now supports 1.7 million jobs across Europe, including around 1.5 million jobs attributable to the App Store ecosystem, some 17,000 of which are based in Ireland.

Apple's website notes that it "has been based in Cork for over 35 years and now directly employs 6,000 people throughout Ireland supporting all aspects of the business." The company also says its Irish team has "doubled in size over the last five years and includes over 80 different nationalities."

paulCC
This is a good joke from the Irish - Apple invested in Ireland only because of the tax agreement between Apple and Ireland - Apple paid very low Irish taxes, and did not have to pay other taxes anywhere else in EU, as the business was run from Ireland.
EU was right in demanding that Apple pays full Irish taxes.
Score: 33 Votes (Like | Disagree)

This is a good joke from the Irish - Apple invested in Ireland only because of the tax agreement between Apple and Ireland - Apple paid very low Irish taxes, and did not have to pay other taxes anywhere else in EU, as the business was run from Ireland.
EU was right in demanding that Apple pays full Irish taxes.

Ireland has received billions of dollars in tax revenue over the years, for products that were sold in other countries. Apple has also spent nearly a billion dollars on offices and factories in Ireland, and employs over 6,000 Irish workers.

if there is a joke here, then the joke is on you.

And you don’t try to minimize your taxes?

If the EU doesn't want companies avoiding taxes by setting up tax shelters then it should enact laws that prohibit such tax shelters. There is nothing illegal or immoral about what Ireland and Apple have done, and it is done by every corporation and individual who is required to file and pay taxes.
Score: 16 Votes (Like | Disagree)

Vasilioskn
I invested 40 years to my Taco Bell where’s my award?
Score: 10 Votes (Like | Disagree)
Read All Comments