Shipments of Apple's popular AirPods lineup are projected to double to 60 million in 2019, according to Bloomberg. The strong growth is due in part to "much higher" early demand for AirPods Pro than Apple had expected. 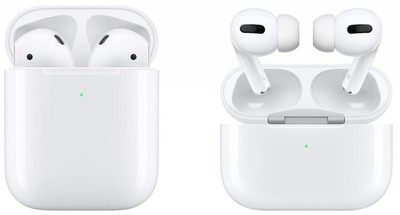 The $249 AirPods Pro -- which offer noise cancellation and water resistance -- have surpassed expectations and demand for them is pushing Apple’s assembly partners against capacity and technical constraints, a person familiar with the matter said. Multiple suppliers are competing for the business of manufacturing the Pro earphones, though some are still building up the technical proficiency.

After a ramp-up in popularity of the original ‌AirPods‌, which debuted in late 2016, Apple has released two updates to the lineup this year, with second-generation ‌AirPods‌ in March and the new ‌AirPods Pro‌ just a few weeks ago.

Apple Watch and ‌AirPods‌ are the two cornerstones of Apple's push into wearables so far, and both have seen strong growth over the past few years. ‌AirPods‌ are the market leader in true wireless earphones, which are proving popular with consumers. While there are some competitors like Sony and Google already in the market, the launch of Microsoft's Surface Earbuds has been pushed back until at least March.

It seems the consumers already have.
Score: 30 Votes (Like | Disagree)

Abazigal
Quite in line with this article.

“AirPods will turn out to be one of the more strategically important hardware products Apple has released this decade. However, you would never know it judging from the way Apple unveiled the device last week. I suspect that was intentional. While the press remains focused on the short-term debate surrounding the iPhone's lack of a 3.5mm headphone jack, few have realized that Apple just unveiled its second wearables platform.”

I do believe that with the AirPods, Apple is well on its way to own the wireless headphones market. While the detractors will dismiss it as overpriced for the sound quality, they once again (predictably) miss the big picture.

This is a runaway train that would be pretty difficult to stop or even slow.
Score: 14 Votes (Like | Disagree)

jcswim312
I just got my AirPods Pro delivered this week!

I love them! The noise cancellation works great!
Score: 13 Votes (Like | Disagree)

do those Samsung’s magically pair up to Apple TV? Work perfectly with “Find My”? Wise choice is to get the ones made by the guys who make your iPhone I think. But if other brands sound better, or are cheaper, then let the chips fall where they may. Competition is good. But the “wise” choice is something we all decide as individuals
Score: 13 Votes (Like | Disagree)

Nicksd84
They are indeed fantastic. However they need a reasonable battery replacement price.
Score: 11 Votes (Like | Disagree)
Read All Comments