Could We See a 16-inch MacBook Pro Announcement Today?

Apple unveiled AirPods Pro on Monday via press release, and speculation is now rife that Apple plans to trickle out further product announcements this week, with Apple's widely anticipated 16-inch MacBook Pro rumored to be next. 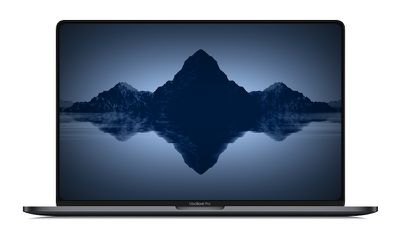 Apple's plans to release a 16-inch MacBook Pro were first revealed by analyst Ming-Chi Kuo back in February. Kuo said Apple was working on a 16-inch MacBook Pro with an all-new design, including the return of a more reliable scissor mechanism keyboard, for release by the end of 2019. Bloomberg's Mark Gurman has also reported that the notebook is coming in 2019.

On Monday, Gurman noted that Apple's new AirPods require macOS 10.15.1 to work on Macs, but Apple hasn't released this to the public, despite launching iOS 13.2 with AirPods Pro support. Gurman speculates that Apple could be holding back the next macOS update until later today because it may contain references to the 16-inch MacBook Pro that Apple doesn't want to draw attention to just yet.

The AirPods ship Wednesday and require macOS 10.15.1, which was not released today despite iOS 13.2 launching. So it probably has some 16-inch MacBook Pro references that Apple wants to hide. So the Pro should be tomorrow? Keyboard is a “delight,” though we’ve heard that before. — Mark Gurman (@markgurman) October 29, 2019

Technically, that horse bolted earlier this month, when icons likely depicting a 16-inch MacBook Pro were found in the first two betas of macOS Catalina 10.15.1 released to developers. Still, it's possible Apple doesn't want to let the cat out the bag completely by shipping the update to the general public.

DigiTimes' sources said Quanta Computer had already begun volume shipments of the 16-inch MacBook Pro, which would have an "ultra-thin bezel design," the aforementioned scissor keyboard, and Intel's latest Coffee Lake Refresh or Ice Lake processors (although Intel has yet to announce Ice Lake chips appropriate for a high-end MacBook Pro).

MacRumors confirmed files likely referencing a new MacBook Pro in the second beta of macOS 10.15.1 b2
The slimmer bezels would result in the 16-inch MacBook Pro being around the same size as the existing 15-inch model, despite having a larger display. IHS Markit analyst Jeff Lin believes the notebook's resolution will be 3,072x1,920 pixels.

In his latest tweet, Gurman says he has heard that the new scissor keyboard on the rumored 16-inch MacBook Pro is a "delight," although he also notes that "we've heard that before" in relation to Apple's much-derided butterfly mechanism keyboard. Hopefully it won't be long before the public can gauge any improvements themselves.

In March of this year, Apple quietly trickled out new AirPods, iPads, and Macs over the course of three consecutive days. Does the company have more staggered releases in store the same week it announces its September-quarter financial results? Could we see the new Mac Pro, so-called "AirTags," or something more in the lead-up to the official launch of Apple TV+ this Friday? Watch this space.

I do not see them releasing a new form factor without fanfare... a silent update would be a speed bump, a new model def deserve at least a keynote :p

But a good way to skip discussion about the new keyboard and it’s reasons ?
Score: 20 Votes (Like | Disagree)

keysofanxiety
Hopefully, but seriously where is this new Apple TV? It's been a good 2 years since last release. I'm ready to buy one, I don't know why they're delaying seeing as TV+ will be out imminently.
Score: 14 Votes (Like | Disagree)

Hopefully, but seriously where is this new Apple TV? It's been a good 2 years since last release. I'm ready to buy one, I don't know why they're delaying seeing as TV+ will be out imminently.

What are you waiting for? ATV already has 4K and HDR support.
Score: 11 Votes (Like | Disagree)

What are you waiting for? ATV already has 4K and HDR support.

To paraphrase Steve, we don’t know what we want until we’re shown it.

More storage options or kinder pricing options would be a few things off the top of my head. There are all sorts of other things they could implement. Split screen, better gaming options, dual output... who knows what they’ll do.

However if I buy a 2017 Apple TV at 2017 Apple prices, I’ll get guaranteed buyer’s remorse when the new model is released shortly. It’s been mentioned in the iOS 13 betas so it’s definitely coming.
Score: 10 Votes (Like | Disagree)

Was planning on the new laptop and after them bricking 9 of my HomePods yesterday I think I've lost my appetite for anything more from Apple given their handling of the matter. Learned a lot about apple yesterday. None of it positive.

What exactly did you learn? That companies are not perfect? Just be happy that they will fix them for free. Also, there could have been way worse problems than bricked speakers.
Like imagine if they released a phone that was recalled for exploding, then recalled again?
Or announced a speaker in August 2018, and it's still not available.
Or a folding phone that was delayed for 6 months, and still breaks at the scratch of a finger nail.
And don't get me started on the garbage that Google has been putting out. A 700$ Chromebook? At least when Apple charges more than they should, you still get a full operating system, not just Google Chrome with some crappy Android apps.
Score: 8 Votes (Like | Disagree)
Read All Comments