Apple's iPhone 11, ‌iPhone 11‌ Pro, and iPhone 11 Pro Max will offer up a new warning if a repair technician ever uses a non-genuine Apple display when repairing a broken device.

"Unable to verify this iPhone has a genuine Apple display" will show up in the General > About section of the Settings app if a repair shop uses an unverified display component. 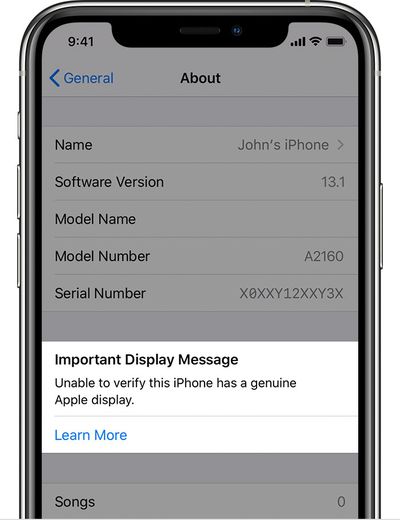 The warning message was outlined by Apple in a new support document that says it will show up on ‌iPhone 11‌, ‌iPhone 11‌ Pro, and ‌iPhone 11 Pro Max‌ devices. Details about the message were also included in the iOS 13.1 release notes, suggesting the feature was enabled with the iOS 13.1 update.

Apple says that the warning is informational only and will not affect the ability to use your ‌iPhone‌ or your display. A notification will be displayed on the Lock screen for the first four days a device is used following the repair, and in the Settings app for 15 days after that before being limited to General > About.

Given that the information is added to a device profile of some kind, Apple repair technicians will be able to see at a glance if a display is genuine or not.

"Only technicians who have completed Apple service training and who use Apple genuine parts and tools should replace ‌iPhone‌ displays," warns the support document. Apple says that this includes Apple itself, Apple Authorized Service Providers, and Independent Repair Providers using genuine Apple parts.

Apple last year implemented a similar warning about non-genuine batteries in ‌iPhone‌ XS, XS Max, and XR devices, letting customers know if an ‌iPhone‌ has been repaired with an Apple provided battery. That feature actually disables the battery health information of the ‌iPhone‌, which caused some controversy.

An updated battery support document released this week says that the battery warning has also been implemented for the ‌iPhone 11‌, ‌iPhone 11‌ Pro, and ‌iPhone 11 Pro Max‌.

On these devices, along with the 2018 iPhones, if a non-genuine Apple battery is used for a repair, users will see a warning about the battery not being able to be verified.

When it comes to batteries, the iPhones pop up the warning even if a non-certified repair shop uses a genuine Apple repair component, and the same could be true for display repairs. Even if a shop is using an actual Apple component, Apple's repair process requires calibration not available to all repair shops.

No functionality is impacted by using non-genuine parts (aside from battery health not working), but Apple could potentially change this in the future. In the past, Apple has disabled some devices that had non-genuine parts, such as the major Error 53 issue that bricked Touch ID iPhones that had been repaired by non-certified repair shops.

Pbrutto
I don’t think this is a bad thing, what if you buy your phone from someone on eBay who says “never been damaged or repaired” you have no way of knowing if they are telling the truth. This helps keep sellers honest and buyers treated fairly. As long as it isn’t affecting being able to use the third party screen(or battery).
Score: 41 Votes (Like | Disagree)

So much for letting customers fix their own iphones.

How are they stopping customers from repairing their own phones? And if a customer does go to a third party repair shop, as is their right, isn't it good for them to know they have just gotten non-Apple parts put into their phone? Why would anyone honest want to keep customers in the dark?
Score: 32 Votes (Like | Disagree)

MagMan1979
Fantastic, I think it's great Apple let's their customers know if they've been duped by these shoddy third-party repair shops who told them "you're getting genuine Apple parts" only to get cheap crap instead.

Still defies all logic and rational thought that people who buy a multi-thousand dollar product would go cheap on repairing it or maintaining it!
Score: 26 Votes (Like | Disagree)

This irritates me. Apple needs to stop their BS, and let the consumers do whatever they want with the phones we OWN. They’re not verifying anything for our safety, just wanting to control the repair game as well.

Why? If I buy a phone on eBay, or get my repairs done at an independent shop, I would want to know that there are non-genuine Apple parts. So what if this serves Apple-- it also serves me, as a consumer.
Score: 24 Votes (Like | Disagree)

So much for letting customers fix their own iphones.

It doesn't stop anyone from repairing their own phone. It just informs the user that the repair was done.
Score: 20 Votes (Like | Disagree)

No they don't
Score: 19 Votes (Like | Disagree)
Read All Comments

Wednesday August 17, 2022 9:51 am PDT by Juli Clover
Apple is aiming to hold its first fall event on Wednesday, September 7, reports Bloomberg's Mark Gurman. The event will focus on the iPhone 14 models and the Apple Watch Series 8. The standard iPhone 14 models are expected to get few changes, but the iPhone 14 Pro models will include updated camera technology, the removal of the notch in favor of a pill-shaped and hole-punch cutout, an A16...
Read Full Article • 174 comments