Apple today released iOS and iPadOS 13.1, marking the first update to the iOS 13 operating system that launched in mid-September. The new iOS 13.1 update comes just days after the release of iOS 13 and coincides with the launch of new iPhones.

The iOS 13.1 update is available on all eligible devices over-the-air in the Settings app. To access the update, go to Settings > General > Software Update. 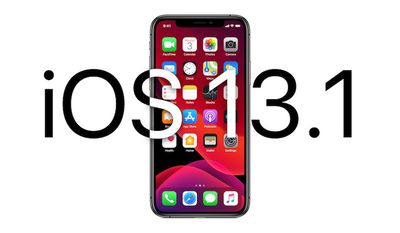 Apple started beta testing iOS 13.1 prior to when iOS 13 even launched, which was a surprise move as the company has never before released a point update for new software before when the software has come out.

iOS 13.1 is an update that brings back several of the features that were removed during the iOS 13 beta testing. Shortcuts Automations, for example, are back.

The volume indicator has been tweaked in iOS 13.1. If you have certain headphones or audio devices connected (AirPods, Powerbeats Pro, HomePod, and Beats headphones) there are special indicators that feature a unique icon that matches your listening device. There's also a special icon for when two headphones are connected to an iPhone or iPad.

The update brings the audio sharing feature introduced in iOS 13 to all Beats headphones with an H1 and W1 chip, expanding the feature from just the AirPods and ‌Powerbeats Pro‌. Audio sharing, as the name suggests, allows multiple sets of headphones to be connected to a single ‌iPhone‌.

HomeKit icons have been overhauled in iOS 13.1, with much more detailed, realistic designs. There are new Reading Goals options for PDF, a change to the Nike branding (it's no longer Nike+), and several other smaller tweaks outlined in our tidbits article.

Full release notes for the update are available below:

iOS 13.1 includes bug fixes and improvements, including AirDrop with Ultra Wideband technology on iPhone 11, iPhone 11 Pro, and iPhone 11 Pro Max, suggested automations in the Shortcuts app, and the ability to share ETA in Maps.

AirDrop
- Ability to select who you want to AirDrop to by pointing from one iPhone 11, iPhone 11 Pro, or iPhone 11 Pro Max to another using the new U1 chip with Ultra Wideband technology for spatial awareness

Battery Health
- Optimized battery charging to slow the rate of battery aging by reducing the time your iPhone spends fully charged
- Performance management feature for iPhone XR, iPhone XS and iPhone XS Max to prevent the device from unexpectedly shutting down, including the option to disable this feature if an unexpected shutdown occurs
- Notifications for when Battery Health is unable to verify if a new, genuine Apple battery is in iPhone XR, iPhone XS, iPhone XS Max and later

Although I will still wait a couple of minutes to make sure I don't accidentally download iOS 13 instead of 13.1

I'm too much of an update-geek, as this is the most exciting moment of my day/week ?
Score: 14 Votes (Like | Disagree)

Velin
Stop with junk posts. The only thing that matters: bug reports. If you have any 13.1 problems or defects, post them ASAP.
Score: 8 Votes (Like | Disagree)