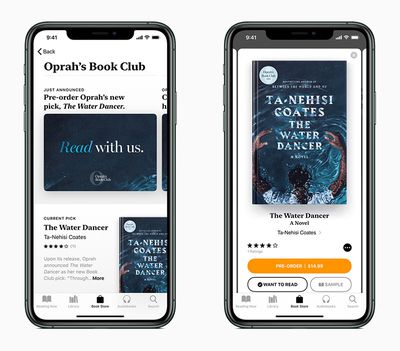 Oprah's Book Club can be accessed in the Apple Books app under Book Store > Browse Sections on iPhone, iPad, and Mac. Winfrey's first book selection is "The Water Dancer" by Ta-Nehisi Coates, available for pre-order now on Apple Books in both e-book and audiobook formats ahead of its debut tomorrow.

For every Oprah's Book Club selection sold on Apple Books, Apple says it will make a contribution to the American Library Association to support local libraries and fund programs that give access to everyone.

Winfrey will interview the authors of her book club selections for a companion Apple TV+ series also named Oprah's Book Club. Winfrey will interview Coates for the first installment of the series, which premieres November 1, the day that ‌Apple TV+‌ launches across iOS, macOS, tvOS, and the web.

Winfrey will interview the authors of her book club selections at various locations. Her conversation with Coates about "The Water Dancer" will be filmed in front of a live audience at Apple's Carnegie Library store in Washington, D.C. next month. A new episode will be available every two months.

I am who I am today because of the experience of learning to read at an early age. Reading opened up a whole world for me beyond the red dirt road and my grandmother's porch in Mississippi. I want to do that for everybody. And the opportunity to do this with Apple, to speak to people all over the world about the pleasures, the excitement, the tension, the drama that a good book can bring you … I don't know what's better than that.

Few people in the world can bring us together like Oprah, whose compassion and grace celebrating the power of books are unmatched. It's our honor to provide a new platform for Oprah's Book Club and support the American Library Association in opening hearts and minds to the joy of reading.

Update: A new Oprah's Book Club trailer has been released for the novel "American Dirt" by Jeanine Cummins.

Great. Another bad partnership and more proof that the Tim Cook era has been more bad decisions than good ones for Apple, not even discussing the lack of innovation.

thasan
So, there’s a show about reading and books... and people are upset. VERY Nice!
No wonder the most powerful men on earth can’t put together a meaningful sentence... (English isn’t my first or even second language)
Score: 8 Votes (Like | Disagree)

Great. Another bad partnership and more proof that the Tim Cook era has been more bad decisions than good ones for Apple, not even discussing the lack of innovation.

I fail to see what is bad about this partnership. Ophrah's Book Club has always been a success, and it shows the link Apple TV will have with other parts of Apple, e.g. Music and Books. But then I guess you would call everything Apple/Tim Cook does bad, regardless of what it is.
Score: 7 Votes (Like | Disagree)

The only person who could convince fat people to get skinny doing what she says to do. While being fat.

If anything, she's one heck of a salesperson...
Score: 5 Votes (Like | Disagree)

I find the Orpah brand rather corny. Her conglomerate promotes books and products, as if she curates all this stuff herself.

I happen to dislike Oprah. However there are millions upon millions of people like my Mom who adore her. For some people she will be the compelling reason to sign up. No doubt she has green lizard blood running through her veins, however don't under estimate the sheer numbers of reptilians out there.
Score: 5 Votes (Like | Disagree)

roland.g
Great. Another bad partnership and more proof that the Tim Cook era has been more bad decisions than good ones for Apple, not even discussing the lack of innovation.
Score: 5 Votes (Like | Disagree)
Read All Comments

Sunday May 22, 2022 1:57 am PDT by Sami Fathi
Apple has silently increased the price of its Apple Music subscription for college students in several countries, with the company emailing students informing them their subscription would be slightly increasing in price moving forward. The price change is not widespread and, based on MacRumors' findings, will impact Apple Music student subscribers in but not limited to Australia, the...
Read Full Article • 180 comments