Samsung has announced the Galaxy Fold will go on sale in South Korea on Friday, September 6, over five months after its original scheduled launch date and just days ahead of Apple's annual iPhone event. 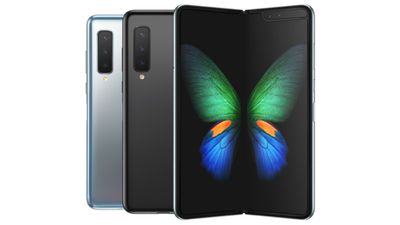 According to The Verge, the Galaxy Fold will also be available in France, Germany, and Singapore come September 18. Samsung hasn't revealed an exact date for the UK or US, but the handset is expected to arrive in those countries in the coming weeks. Initially at least, the phone will be available in just a single configuration, offering 512GB of storage, 12GB of memory, and 5G support, with a Montblanc luxury case thrown in.

Samsung will be crossing its fingers and its toes in the hope of a fault-free rollout this time around. The folding smartphone was initially meant to be in the hands of customers in April, but it was delayed following multiple reports from reviewers of broken units after just a few days' use. Many reviewers experienced issues while testing the device, including random bulges appearing on the 7.3-inch display and flickering screens. In many cases, the issues were enough to make the $1,980 device completely unusable.

An independent investigation revealed that the folding phone lacked adequate protection against the ingress of debris between the OLED screen and the chassis bezel. Samsung recalled all Fold devices that were distributed to reviewers and said it was postponing the launch of the hybrid handset while it completed a redesign to resolve the display failures. The South Korean firm said in July that the phone would relaunch in September, but didn't specify a date.

Samsung is already working on its next bendable smartphone, according to a Bloomberg report earlier this week. Projected to launch early next year, it's said to be a flip phone-style 6.7-inch device that can be folded down into a compact-sized square.

Apple's ‌iPhone‌ event takes place on September 10, when the company is expected to launch three new iPhones with more advanced cameras. The line-up includes two OLED models in 5.8 and 6.5 inches and one LCD model that's 6.1 inches. Apple is said to be exploring folding screen technology, but nothing suggests it plans to release a foldable smartphone in the near future.

Apple is said to be exploring folding screen technology, but nothing suggests it plans to release a foldable smartphone in the near future.

They will in 3 years and people will claim Apple invented bendables :D...considering the iPhone 6 / iPad Pro 2018 issue they might even be right :p
Score: 10 Votes (Like | Disagree)

Malcster
Excited for this! Obviously won't be buying this model (and likely few will) but genuine excitement for where this technology will be in 2-3 years. Good on Samsung for pushing it forward.
Score: 10 Votes (Like | Disagree)

They will in 3 years and people will claim Apple invented bendables :D...considering the iPhone 6 / iPad Pro 2018 issue they might even be right :p

I've never seen anyone claim Apple invented anything that another phone had first. Where does this even come from?
Score: 9 Votes (Like | Disagree)

Vol Braakzakje
IF apple ever builds a foldable phone, it will be when the technology is ready. But I'm happy Samsung is trying new things, keeps their fans happy.
Score: 9 Votes (Like | Disagree)

They will in 3 years and people will claim Apple invented bendables :D...considering the iPhone 6 / iPad Pro 2018 issue they might even be right :p

Physics can't be fooled and as such these things will fail often/early.
Score: 8 Votes (Like | Disagree)
Read All Comments