The Wall Street Journal reports that Samsung has delayed its launch of the Galaxy Fold until "at least next month" after multiple review units experienced sudden display failures while being tested by the media last week. 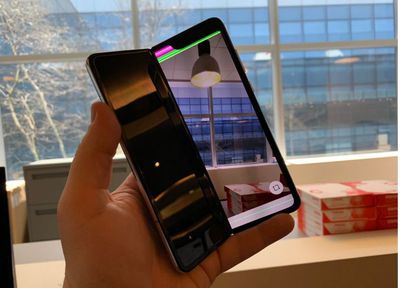 Todd Haselton/CNBC
Samsung initially said it remained committed to launching the Galaxy Fold on April 26, but the rollout is now expected in the "coming weeks." The company has yet to confirm the delay, but it wouldn't be surprising given that at least some of the folding smartphones appear to have a serious hardware issue.

Galaxy Fold launch events in Hong Kong and Shanghai have already been postponed, according to Engadget's Richard Lai.

Samsung earlier confirmed that it would "thoroughly inspect" the affected devices to determine the cause, but it has yet to provide an explanation. Samsung also cautioned that removing the protective layer on the display could cause damage, but some displays failed even with the protective layer in place.

The delay would be an embarrassing mishap for a smartphone that starts at $1,980, but the right move before the Galaxy Fold gets into the hands of thousands of customers around the world and potentially turned into a larger problem.

Update: Samsung has confirmed the delay in a statement provided to CNBC, noting that it will announce a new release date "in the coming weeks" and "will take measures to strengthen the display protection."

We recently unveiled a completely new mobile category: a smartphone using multiple new technologies and materials to create a display that is flexible enough to fold. We are encouraged by the excitement around the Galaxy Fold.

While many reviewers shared with us the vast potential they see, some also showed us how the device needs further improvements that could ensure the best possible user experience.

To fully evaluate this feedback and run further internal tests, we have decided to delay the release of the Galaxy Fold. We plan to announce the release date in the coming weeks.

Initial findings from the inspection of reported issues on the display showed that they could be associated with impact on the top and bottom exposed areas of the hinge. There was also an instance where substances found inside the device affected the display performance.

We will take measures to strengthen the display protection. We will also enhance the guidance on care and use of the display including the protective layer so that our customers get the most out of their Galaxy Fold.

We value the trust our customers place in us and they are always our top priority. Samsung is committed to working closely with customers and partners to move the industry forward. We want to thank them for their patience and understanding.

Greenmeenie
And this is why Apple always waits to put out new tech. They wait until they can perfect it.
Score: 41 Votes (Like | Disagree)

rtomyj
I’ve grown to hate Apples QA as of late but come on. If this was an Apple product there would be mass hysteria. Equality please. Let’s all trash Samsung in unison on this glorious earth day my friends.
Score: 39 Votes (Like | Disagree)

Andres Cantu
Foldgate. Or is Apple the only company that gets the honor of a -gate? :D
Score: 37 Votes (Like | Disagree)

And this is why Apple always waits to put out new tech. They wait until they can perfect it.

Always, huh? Like the butterfly keyboard which is still failing frequently, even in its third generation design?
Score: 37 Votes (Like | Disagree)

Maybe they're just folding it wrong.
Score: 27 Votes (Like | Disagree)

BootsWalking
Unless the display failures were a simple and correctable manufacturing defect I doubt a one-month delay will be long enough to fix what is likely a fundamental design issue.
Score: 25 Votes (Like | Disagree)
Read All Comments