iFixit today published its teardown of Samsung's Galaxy Fold, offering more details on a potential flaw in the device, which has now been delayed following reports of several broken review units.

Essentially, it looks as though Samsung was so focused on perfecting the folding mechanism on the smartphone/tablet hybrid that it made a major oversight: providing adequate protection against the ingress of debris between the OLED screen and the chassis bezel. 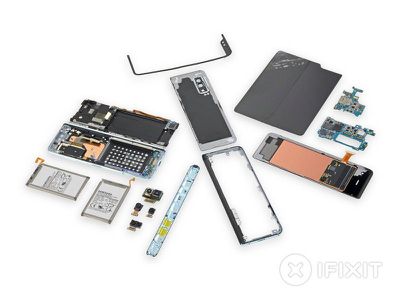 To achieve the fold, the thin bezel that surrounds (and protects) the screen leaves a gap where the two halves meet... This 7 mm gap doesn't seem like a huge deal, but it leaves the display exposed—so should something accidentally enter, it's curtains for the screen. (Oops.)

When closed, the screen is protected—but the spine is flanked by massive gaps that our opening picks hop right into. These gaps are less likely to cause immediate screen damage, but will definitely attract dirt.

Many reviewers experienced multiple issues while testing the device, including a random bulge appearing on the display, as well as flickering and failing screens. In many cases, the issues were enough to make the $1,980 device completely unusable.

In a statement, Samsung said its initial findings from the inspection of reported issues on the display showed that they could be associated with impact on the top and bottom exposed areas of the hinge. It also said "substances" were found inside the device, which affected the display performance.

As iFixit notes, it will be interesting to see how folding designs manage to overcome these weaknesses in future - if indeed they have a future. Following Samsung, Huawei and Xiaomi revealed that they too will launch folding smartphones, and there are signs Apple is looking into the possibility of a foldable iPhone. Apple has filed several patent applications related to folding phones that variously fold inward, outward, and both inward and outward.

Potential point of entry for debris ingress (Image: iFixit)
As for the Galaxy Fold, the months ahead look increasingly uncertain. One day after Samsung said it was delaying the launch of the hybrid handset, the company announced that it would be retrieving all Fold devices that were distributed to reviewers.

In an email to pre-order customers about the delayed launch, Samsung said that it will update customers with more specific shipping information in two weeks. "Your pre-order guarantees your place in the queue for this innovative technology," the company promised.

KmanOz
Samsung is so hell bent on being first to the market even so far as to release a product with serious design flaws TWICE. Maybe they should've used the battery from the exploding Note so the Fold could self destruct after a week of use and save everyone some time.
Score: 34 Votes (Like | Disagree)

44267547
Kind of an unacceptable ‘flaw’ from a $2000 tech device. It Makes you wonder how much quality testing was completed on the Fold during the R&D phase. I don’t know that this entirely damages Samsung’s branding, but it doesn’t look good either for what they were calling the ‘future’.
Score: 31 Votes (Like | Disagree)

StellarVixen
6 years of research and development, and the result is this fiasco.


This is what you get for creating a solution in search of a problem. You get the problem, but not the one you intended to solve.
Score: 26 Votes (Like | Disagree)

Why some posters are acting like Samsung realesed this to the public already?

It a good thing this and other faults were caught early.

Early? Are you serious? They were in full on launch mode for this thing to go live and had bloggers and tech writers inform them about their flaws. Their own product people didn't realise or were too afraid to speak up to their bosses. Their own QA is either non-existent or too afraid to raise issues.
Score: 26 Votes (Like | Disagree)

MacOH21
This is what happens when Samsung has no one to copy.
Score: 22 Votes (Like | Disagree)

I guess the same argument could be made that the iPhone copies Samsung in some aspects, but in this respect, you have to give Samsung due credit for trying something new, even though it is a flawed product, which now it’s their responsibility to make it better moving forward.

Anybody can try something new and throw products against the wall to see what sticks. It takes more discipline to resist the urge to release something immediately and actually spend time honing the device to perfection.

Samsung shouldn’t be praised for making their consumers beta testers. We all know it’s just so they can have “we did it first” bragging rights if Apple ever release a foldable display device in future.
Score: 20 Votes (Like | Disagree)
Read All Comments