Apple Invites Media to September 10 Event at Apple Park: 'By Innovation Only'

Apple today sent out media invites for its annual iPhone-centric event that will be held on Tuesday, September 10 at 10:00 a.m. at the Steve Jobs Theater at the Apple Park campus in Cupertino, California.

The media invites offer up a first look at the theme of the event and feature the tagline "By innovation only." 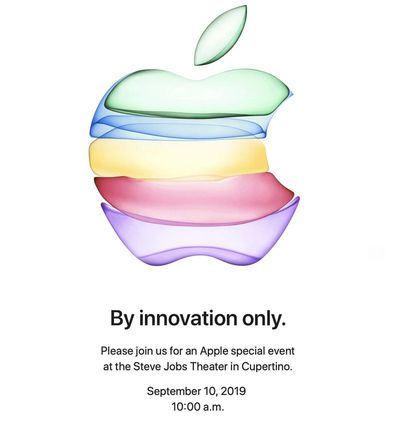 Image via Neil Cybart
There's a lot to look forward to when it comes to the 2019 iPhone lineup, which will be the main feature at the September 10 event. Apple is expected to continue to offer three iPhones, two OLED models in 5.8 and 6.5 inches and one LCD model that's 6.1 inches, but all three will see camera improvements.

The two OLED models are said to have triple-lens camera setups arranged within in a square bump, with the setup including a telephoto lens, a wide-angle lens, and a new super-wide angle lens.

Users will be able to zoom out further to capture a wider field of view, and the new setup will bring improvements to low-light images. As for the 6.1-inch ‌iPhone‌, it's getting a dual-camera setup for the first time.

Apple is going to use a new matte finish for the iPhones, and they're said to feature better shatter and water resistance for improved durability. Face ID is being improved and will work from more angles, but there won't be other changes to the notch.

3D Touch is also being eliminated in favor of the haptic feedback system first introduced with the ‌iPhone‌ XR. Bilateral wireless charging, bigger batteries, a new AMX co-processor and A13 chip are some of the other features that we're expecting to see.

Apple's fall event also often includes the Apple Watch, and while it's looking like we're not going to see many updates to the watch this year, there are hints of new ceramic and titanium models.

New iPad Pro models, a new 10.2-inch iPad, and a new high-end 16-inch MacBook Pro are also on the horizon and are expected to launch in the fall, but it's not clear if Apple will introduce these at its September event or hold a second fall event as it often does.

A mockup of a 16-inch MacBook Pro
Apple's new hardware will ship with the latest version of iOS, iOS 13, and ahead of when the new iPhones launch, we can expect to see iOS 13 released alongside macOS Catalina, watchOS 6, iPadOS, and tvOS 13.

Two new services, Apple Arcade and Apple TV+, are going to launch this fall, so we may hear additional details including pricing information and release timelines at the September event.

As with past events, Apple will stream the event live on its website and on the Apple TV when it kicks off at 10:00 a.m. Pacific Time, but for those who are unable to watch, MacRumors will be providing full event coverage both on MacRumors.com and through the MacRumorsLive Twitter account.

ElectricPotato
Remember, when pricing is revealed the audience is supposed to applaud, not gasp in horror. Your next invitation depends on it.
Score: 73 Votes (Like | Disagree)

Freida
Lets see how boring it is going to be :)
Score: 60 Votes (Like | Disagree)

macduke
“By Innovation Only”

It takes "courage" to say that about a phone that is rumored to not have many changes.
Score: 60 Votes (Like | Disagree)

GeoStructural
The irony in that title...
Score: 52 Votes (Like | Disagree)

Lets see how boring it is going to be :)

By “innovation only”. I’d love to see someone stand up during the keynote and say out loud “C’mon Apple this is getting ridiculous”.
Score: 39 Votes (Like | Disagree)
Read All Comments