Fall 1989 Catalog for Steve Jobs' NeXT Company Uploaded to Archive.org

An interesting piece of technology history was highlighted by The Verge over the weekend that may be of interest to Apple users both young and old.

Amateur computer historian Kevin Savetz recently scanned the Fall 1989 issue of the NeXT catalog and uploaded the files to Archive.org. That makes the entire 138-page book available for perusal online, offering an intriguing glimpse into NeXT's software, user interface, peripherals, and more. 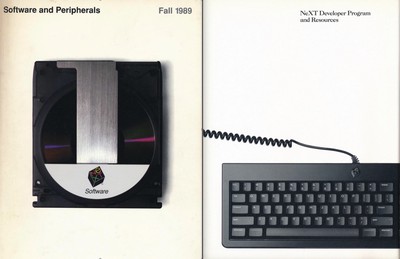 For those unfamiliar with the history, NeXT was the company that Steve Jobs founded in 1985 shortly after he was fired by Apple, along with a handful of co-workers. The company specialized in designing high-powered computer workstations for the higher education and business markets.

I scanned the fall 1989 NeXT Software and Peripherals catalog in glorious 600 DPI and uploaded to @internetarchive. 138 pages! https://t.co/a1xpteHERt pic.twitter.com/UbV6zKcZEm — Kevin Savetz (@KevinSavetz) July 4, 2019

Estimates suggest NeXT shipped about 50,000 computers in total, so sales were limited. However, the legacy of the NeXTSTEP OS and development environment proved to be highly influential, and eventually became the basis for macOS, iOS, watchOS, and tvOS.

Savetz told The Verge that the catalog was "part of a large lot of old computers that I bought from a local computer refurb/recycling organization. I had never seen a catalog like it, and couldn’t find much reference to it online, so it was an easy choice to scan it."

Likely a fascinating document, but a clear violation of copyright law to make a copy and post it.

Or, did he get permission from Apple to reproduce this? Doubtful, but you never know!

Archive.org will not allow *any* content that is not Public Domain. This is the whole point of Archive.org - an archive of media which is specifically PD.

You might be interested to know that in the “Old Time Radio" section there exists a nearly complete archive of the CBS Radio Mystery Theater in one single example. The only reason it even exists is because a HAM Radio/SW Radio enthusiast began recording it on reel-to-reel when it debuted, including the Audition (pilot) episode which was in fact titled, Inner Sanctum Mysteries and was produced by Himan Brown. CBS decided to keep the old creaking door but retitled it CBS Radio Mystery Theater. They never saved an episode and never renewed their Copyright. Thanks to this guy and his timer (which recorded in gross increments, 30, 60, 90, etc.) we not only have nearly all the CBSRMT episodes but we get about 10 - 15 minutes of WOR local and national news. We even get the episode interruptions for important bulletins regarding Ford's assassination attempt and Vietnam troop withdrawal.

The last hold-out was QUIET PLEASE. It was uploaded in its entirety but then taken down by a challenge from the family of Ernest Chappell, the actor and narrator who performed in every episode, who claimed since there were only a few extant shows known before a nearly complete shellac disc transcription archive was found under his bed, the family owned the program in its entirety. A Court found they did not and the archive was restored.

Archive.org doesn't get nearly the attention it deserves. You can get lost in all the wonderful items they have digitally stored there.

Sure he does. Just needs to be asked nicely. Cook can offer him his own team of designers and engineers for any special projects he wants to tinker with.  can only coast on past innovation for so long. It's time for the next era. And that requires a creative visionary, not a business manager.

I’m not sure Woz was a creative visionary. He was an engineer and a tinkerer, yes - invented some amazing stuff initially - but the vision was Jobs.

What’s Woz done since he left Apple originally? Not nothing, of course. He’s done some good stuff with his life, and he’s wealthy enough that he can afford a team of his own without Cook’s help if he wants. But he hasn’t done anything like that.

What’s Woz done with his life that’s anything like what Jobs achieved (both before and since he rejoined Apple)?
Score: 4 Votes (Like | Disagree)

Credit for Jobs rejoining  goes to Gil Amelio, whose decision to rehire proved to be the single most effective move in the history of business.

Now let’s see if Cook has the balls to bring back Wozniak.

Woz wants nothing to do with the business. At all.

The graphic design is striking in that it seems so modern even now. Exceptional given its age. It must have seemed incredibly alien 30 years ago. It is stunning.

Modern graphic design in that style goes back 100 years, and it wasn't uncommon at all in 1989. It just contrasted wildly with popular contemporary graphic design.
Score: 3 Votes (Like | Disagree)

Credit for Jobs rejoining  goes to Gil Amelio, whose decision to rehire proved to be the single most effective move in the history of business.

Now let’s see if Cook has the balls to bring back Wozniak.

Agreed that Gil Amelio gets credit for that move. Insanely great decision. A few problems with the latter comment though...

1. Woz doesn’t have any desire to come back to Apple. Nor is he the right talent for Apple now. Not to say he wouldn’t have anything to contribute but his particular expertise and magic isn’t something Apple specifically needs anytime soon.

2. Big difference between where Apple was at then (90 days away from bankruptcy) and now (one of the most - if not the most - wealthy and successful companies in the world, ever). From a business perspective Apple hardly needs saving anytime soon.

3. If Apple needs anything right now it’s product vision. For that, if anyone needs to come back - if “Cook [needs] the balls to bring back” anyone - its Forstall. If he’ll come.
Score: 2 Votes (Like | Disagree)

I remember seeing this back in the day. What was interesting was that the catalog had what we call "high production values." Thick paper, excellent finish, first-class printing and typography and graphics. Almost 2x thicker than a catalog of similar page count would have been. We speculated that it was to give the impression that there was more there than was actually there. Increase the Thud Factor. Drive credibility that NeXT would be a force.

I love high-quality catalogs of products I have an interest in. These days very few companies put the time and effort into such things. It's a simple and satisfying pleasure to pour a cup of coffee and sit down with a good catalog and enjoy the content and all the work put into it.
Score: 1 Votes (Like | Disagree)

Bones13
I saw a Next Cube in 1989 in a lab at UCSF - it was connected to the "internet", which back then allowed research labs to share data and papers. I was unimpressed at the time. It took me awhile to figure out what the "internet" was back then. Sadly, it took AOL to introduce me.
Score: 1 Votes (Like | Disagree)
Read All Comments

Tuesday October 27, 2020 4:14 am PDT by Tim Hardwick
The first iMac powered by Apple Silicon is set to arrive in the first half of next year and will feature a desktop class "A14T" chip, according to Chinese-language newspaper The China Times. Codenamed "Mt. Jade," Apple's first custom-made desktop processor will be twinned with its first self-developed GPU, codenamed "Lifuka," both of which are being produced using TSMC's 5-nanometer process, ...
Read Full Article • 286 comments

Monday October 26, 2020 3:38 pm PDT by Juli Clover
Alongside the iPhone 12 and 12 Pro models, Apple introduced a new MagSafe charger that attaches to the magnetic ring in the back of the devices, providing up to 15W of charging power, which is double the speed of the 7.5W Qi-based wireless charging maximum. Apple does not provide a power adapter with the $39 MagSafe charger, requiring users to supply their own USB-C compatible option. Apple...
Read Full Article • 439 comments

Tuesday October 27, 2020 12:36 pm PDT by Joe Rossignol
Last week, a listing appeared in the Bluetooth product database for an Apple product with a placeholder name "B2002" and a model number of "TBD." MacRumors was alerted to the listing by health and fitness tech website MyHealthyApple. The product is filed under the "personal computer" category, which Apple has used for previous Mac and iPad listings in the database, so it is hard to pinpoint...
Read Full Article • 32 comments

Wednesday October 28, 2020 10:15 am PDT by Juli Clover
Apple today seeded a new macOS Big Sur 11.0.1 beta to developers for testing purposes, with the new beta replacing the existing macOS Big Sur 11 beta 10 update that was released two weeks ago. The macOS Big Sur beta can be downloaded through the Apple Developer Center and once the appropriate profile is installed, subsequent betas will be available through the Software Update mechanism in...
Read Full Article • 242 comments