Razer today announced the launch of the Razer Core X Chroma, a new addition to its eGPU lineup.

The Razer Core X Chroma improves on the existing Core X eGPU with a new 700W power supply, additional ports, and customizable Razer Chroma lighting, which Razer is known for. Chroma lighting can reproduce more than 16 million colors and is used in Razer products from keyboards to notebooks. 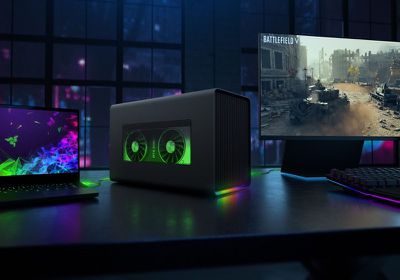 Like other Razer eGPUs, the Razer Core X Chroma is compatible with Thunderbolt 3-equipped PCs and Macs, including Apple's Thunderbolt 3 notebooks. Razer eGPUs are designed to give notebook owners a way to play desktop class games and take advantage of a more powerful GPU for GPU-intensive tasks.

The Razer Core X Chroma is compatible with a range of desktop PCIe graphics cards, including NVIDIA GeForce RTX, GeForce GTX, and Quadro cards along with AMD XConnect-enabled Radeon and Radeon Pro cards.

Razer is using the same general enclosure design for the Core X Chroma, with a black aluminum casing that features a side window to show off the colored lighting. Graphics cards can be inserted using a simple drawer-style slide and lock mechanism and a single thumbscrew.

There's a Gigabit Ethernet port included, along with four USB 3.1 Type-A ports. It supports up to 3 slot-wide desktop graphics cards that require up to 500W of power, and for Macs, it supplies up to 100W of power for charging purposes.

Razer is pricing the new Core X Chroma at $400, and it is available for purchase from the Razer website starting today.

That’s assuming the kind of modularity we get with the 2019 Pro is based on open PCIe interfacing rather than custom sandboxed bespoke Apple modules. Who the hell knows what they’re going to do. It would be cool if the new Pro was basically just like the old one with a smartened up case and a version of macOS that properly supports cutting edge Nvidia hardware and ray-tracing but Apple doesn’t seem interested in any of that
Score: 4 Votes (Like | Disagree)

Apple Knowledge Navigator
Forgive my ignorance, but don’t the cards themselves still need to be compatible with MacOS? If modular is what Apple’s going for with the Mac Pro, I would expect to see a lot more compatibility than present.
Score: 3 Votes (Like | Disagree)

I think a lot of people who buy these enclosures are considering bootcamping into Windows and using the eGPU for gaming if they're going the Nvidia route. I am considering it for my 2019 5K iMac.
Score: 3 Votes (Like | Disagree)

You are completely wrong about how users have been using nVidia 9 and 10 series cards. Apple stopped making drivers; so nVidia has been making them instead (nVidia Web Driver); they are not Beta drivers. These drivers are not only used by hackintosh users; but also people with pre-trashcan MacPros. So the fact that Apple and nVidia can't come to terms and get drivers working for Mojave is also screwing users with genuine kit.

Apple probably can't come to terms that the old Mac Pro with a updated modern nVidia GPU spanks the **** out of the Trashcan.
Score: 2 Votes (Like | Disagree)