Disney CEO Bob Iger Staying on Apple's Board, Will 'Continue to Monitor' Situation

Disney CEO Bob Iger has sat down with CNBC's David Faber to discuss a wide range of topics, including the company's upcoming streaming service Disney+ and how that will impact his position on Apple's board of directors. 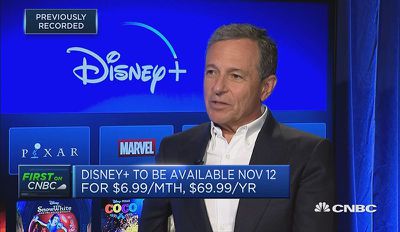 Despite the fact that Disney+ will compete with Apple's upcoming TV+ streaming service, Iger said the business of direct-to-consumer television or movies is "still very small" to Apple. At this point, Iger doesn't believe the situation is "problematic," but said it is one he will "continue to monitor."

DAVID FABER: The Apple board. It's another thing I just was curious about. Can you stay on that board?

BOB IGER: Well, obviously, when you sit on the board of a publicly traded company, you have to be very mindful or your responsibilities, fiscal responsibilities to the shareholders of that company, and I have been. When the business of direct-to-consumer or television or movies is discussed on the Apple board, I recuse myself from those discussions. There aren't many of them. It's still very small business to Apple. And I'm not at the point where I, you know, I believe it's problematic, but it's something that I have to continue to monitor.

Apple named Iger to its board of directors in 2011 under the leadership of CEO Tim Cook.

Disney+ will feature both new and existing movies and series from Disney and its brands, including Pixar, Star Wars, Marvel, and National Geographic. It will also offer series from Fox, including all 30 seasons of The Simpsons.

The service is slated to launch November 12 for $6.99 per month in the United States, with a worldwide rollout in major countries expected by 2021. Disney+ will be accessible on the web, smartphones, smart TVs, tablets, media players like Roku, game consoles like the PS4, and likely the Apple TV.

Apple TV+ will feature original movies and TV shows with well-known directors, producers, and actors such as Jennifer Aniston and Steven Spielberg. The service will be accessible through Apple's TV app on iPhone, iPad, Apple TV, and the Mac starting in the fall, but Apple has yet to reveal pricing.

Moonlight
Iger is WAY smarter than Cook and it shows.
Score: 22 Votes (Like | Disagree)

Kermit262
I'm a huge fan of Apple and Disney, but in in this case there is no contest - we will be subscribing to Disney+ and passing on Apple TV+.
Score: 18 Votes (Like | Disagree)

Iger is WAY smarter than Cook and it shows.

Go over to DISboards or WDWForums and see what they think about Iger.

From a factual perspective, AAPL has outperformed DIS over the last 10 years and is about 4 times the size.

Cook added $600B in market cap to AAPL since he took over, or about 3 total Disney companies.

Iger is CEO of a media company and they STILL don’t have a streaming service. Based on market response today, they’ve been dying to have it and Disney was SUPER late.

I own shares in both companies and think Disney is a top 5 company, but Cook has done better.
Score: 18 Votes (Like | Disagree)

AngerDanger
Gotta commend @Joe Rossignol for not using that standard photo of Iger where he looks like he's blowing up the Disney World Castle.

Analog Kid
I really hate the fragmentation in the streaming market, and it seems to be driven by the fact that everyone wants to own the end to end experience. I feel like the consumer would benefit much more from a separation of content providers and delivery services. If I had my druthers, I'd be watching Disney content on Apple hardware through the Netflix service.

I'm starting to feel like Netflix is going to get squeezed out if it keeps heading in this direction, which would be a shame because they really did remake the face of media consumption.
Score: 15 Votes (Like | Disagree)
Read All Comments