Another reference to AirPower was discovered on Monday, this time in relation to Apple's new AirPods range. The photo below was sent to MacRumors and shows Apple's long-delayed wireless charging mat on the back of the box for the new Wireless Charging Case for ‌AirPods‌, which Apple announced last week. The image has since been verified by other Twitter users who have received their charging case orders early. 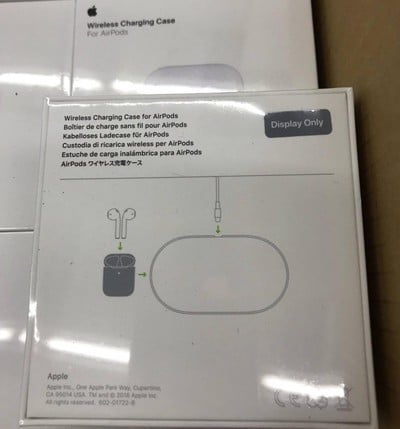 The Wireless Charging Case packaging clearly shows the distinct pill-shaped outline of the ‌AirPower‌ charging mat externally powered by what appears to be a USB-C or Lightning cable, indicating that the yet-to-be-released device can be used to charge ‌AirPods‌ using the wireless-compatible charging case.

Apple launched its new second-generation ‌AirPods‌ on Wednesday, and customers who ordered them on the same day are expecting deliveries between March 26-27. The new ‌AirPods‌ are available with a wired charging case for $159 or with a Wireless Charging Case for $199. Apple is also selling the Wireless Charging Case separately for $79, so that existing owners of first-generation ‌AirPods‌ can charge their earbuds wirelessly using Qi-compatible charging mats. The new ‌AirPods‌ will be available at Apple Stores and select resellers later this week.

Last week, MacRumors uncovered what appears to be a new Apple product image of the ‌AirPower‌ with an iPhone XS and the new ‌AirPods‌ with Wireless Charging Case on it. MacRumors has also uncovered evidence to suggest that Apple has secured the rights to the AirPower trademark in the United States.

Meanwhile, The Wall Street Journal reported that Apple approved production of the AirPower earlier this year, and reputable analyst Ming-Chi Kuo has said the ‌AirPower‌ will be released within the first half of 2019. According to Taiwanese publication DigiTimes, Apple plans to release its long-awaited wireless charging mat ‌AirPower‌ in "late March."

‌AirPower‌ is designed to charge multiple Apple devices at once, including the ‌iPhone‌ 8 and newer, Apple Watch Series 3 and newer, and ‌AirPods‌ when they are placed in the new optional wireless charging case.

AppleHaterLover
I'm sure that when AirPower finally arrives some people will cry themselves to sleep in disappointment.

You go to the Apple Store feeling more anxious than that time Mom said Santa would bring you that N64 for Christmas.

And then you place your phone on that goddamn mat. And your phone charges. And that's it.

The phone charges. Like it has since the beginning of time when connected to a charger. Because it's a ****ing charger that ****ing thing you just bought. What will we do with our lives when that finally happens????
Score: 48 Votes (Like | Disagree)

Shut the hell up about the AirPower already.
Score: 16 Votes (Like | Disagree)

Klae17
Literally the unicorn of all apple products.
Score: 15 Votes (Like | Disagree)

Enclavean
Apple is just a big tease at this point
Score: 14 Votes (Like | Disagree)

Nismo73
You cut the picture out and just pretend.
Score: 12 Votes (Like | Disagree)
Read All Comments