Based on source code from the AirPods page of Apple's website in Australia, MacRumors has uncovered what appears to be a new image of the AirPower with an iPhone XS and the new AirPods wireless charging case on it, providing yet more evidence that Apple still plans to release the wireless charging mat at some point. 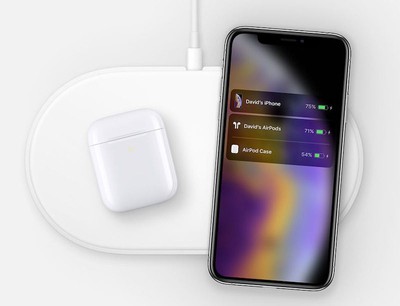 Apple updated its AirPods page yesterday after unveiling a second-generation pair, and this image was intended to showcase the new optional wireless charging case on a Qi-enabled charging mat, but Apple never ended up featuring the image publicly. We found it hidden within a CSS stylesheet.

A similar ‌AirPower‌ image with an older ‌iPhone‌ X was removed from the AirPods page yesterday after the wireless ‌AirPods‌ charging case was announced:

While the ‌AirPower‌ might still be coming after all, a specific release date remains unclear. The Wall Street Journal yesterday reported that Apple approved production of the AirPower earlier this year and reputable analyst Ming-Chi Kuo recently said the AirPower will be released within the first half of 2019.

There was some hope that Apple would announce the ‌AirPower‌ today after announcing new iPads on Monday, new iMacs on Tuesday, and new ‌AirPods‌ on Wednesday, but that never materialized. We also didn't get a new iPod touch, although Kuo and other sources have indicated that one is coming at some point this year.

‌AirPower‌ is designed to charge multiple Apple devices at once, including the ‌iPhone‌ 8 and newer, Apple Watch Series 3 and newer, and ‌AirPods‌ when they are placed in the new optional wireless charging case introduced yesterday. The images on the ‌AirPods‌ page have simply never showed the Apple Watch on the mat.

‌AirPower‌ was in fact shown with an Apple Watch on it when previewed on stage and on the Apple Watch page earlier last year:

Thanks to Michael Bateman for tipping MacRumors.

ELman
Everyone wants one until they see the price.
Score: 16 Votes (Like | Disagree)

That’s not an Airpower. That’s a blatant knock-off.

Sherlock Holmes has figured it out guys!
Score: 12 Votes (Like | Disagree)

munpip214
Hmm, only two devices? Maybe they gave up on Apple Watch support? If so, it better not cost more than $100
Score: 10 Votes (Like | Disagree)

djeeyore25
300 years from now: A photo of the upcoming AirPower was spotted charging the iPhone MCXXXII.
Score: 9 Votes (Like | Disagree)

AngerDanger
[SPOILER="I was wrong."]It appears as though they've tweaked the dimensions slightly. I scaled the original AirPower image from Apple's site to match this one based on the AirPods case, and the new one is bigger.

The new AirPower image appears to depict a design that is the same size as the previous.