Wireless AirPods Charging Case Expected Soon, but AirPods 2 May Not Launch Until Fall

OnLeaks' Steve Hemmerstoffer today tweeted that the AirPods wireless charging case will be ready to launch sometime soon, but the actual AirPods 2 with "Hey, Siri" funtionality may be delayed to the fall. 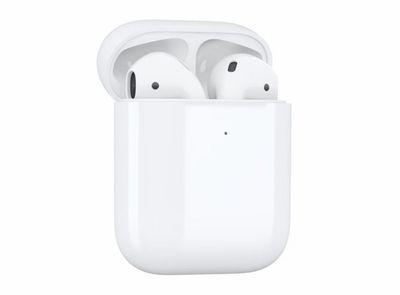 OnLeaks itself casts some doubt on this rumor, by stating up front that the news was gained from a "new and yet unconfirmed," but seemingly reliable source. Hemmerstoffer appears to be most certain about the wireless charging case launching soon and being shipped with the first-generation AirPods.

Some #AirPods2 details I got from a new and yet unconfirmed but seemingly reliable source. Thus, I can't vouch these at 100%...
- New wireless charging #AirPods Case to be launched soon BUT shipped with current AirPods
- Brand new AirPods + new color(s) likely unveiled this fall pic.twitter.com/eNYom3Xys6 — Steve H.McFly (@OnLeaks) February 12, 2019

Most rumors about AirPods 2 have pointed toward an early 2019 launch for the new wireless earphones, so definitely take this new report with a grain of salt. Just this morning, a sketchy report from Greek tech news site iphonehellas.gr claimed the new iPads, AirPods 2, and AirPower are all set to launch on March 29. Yesterday, DigiTimes reiterated previous rumors that stated Apple will release AirPods 2 in the first half of the year.

When they do launch, OnLeaks says the AirPods 2 will come in new colors, and yesterday rumor site MySmartPrice claimed that the new headphones will come in black and white. Beyond AirPods 2 and their new "Hey, ‌Siri‌" functionality, Apple is believed to already be working on the third-generation AirPods, which are rumored to have some form of water resistance.

Hemmerstoffer and OnLeaks have a previous track record of sourcing information from Apple's supply chain, as well as the supply chains of other smartphone manufacturers. For example, Hemmerstoffer shared renders of the 2018 iPad Pro with accurate depictions of the tablet's redesign one month before the device was revealed by Apple.

Man, I can already imagine the wide array of color option Apple provides us with! :)

ubestbsteppin
This rumor certainly sounds more Apple-like. Release the charging case now so current Airpod owners buy it up and hold the Airpods 2 for a few months to not cannibalize charging case sales.
Score: 15 Votes (Like | Disagree)

Bdub12
And I get to wait another 6 months to buy AirPods. Sigh.
Score: 12 Votes (Like | Disagree)

I7guy
This is what happens when rumors collide.
Score: 5 Votes (Like | Disagree)

peterh988
Just give me some news about an iMac, dammit! :)
Score: 5 Votes (Like | Disagree)
Read All Comments

Friday August 12, 2022 12:46 pm PDT by Juli Clover
Samsung this week launched its fourth-generation foldable devices, the $1,000 Galaxy Z Flip and the $1,800 Galaxy Z Fold. Though there's no sign of a comparable Apple foldable device on the horizon, rumors suggest prototypes are in the works, so we thought we'd take a look at Samsung's newest smartphones to see what Apple needs to measure up to when a foldable iPhone does come out. Subscribe ...
Read Full Article • 229 comments