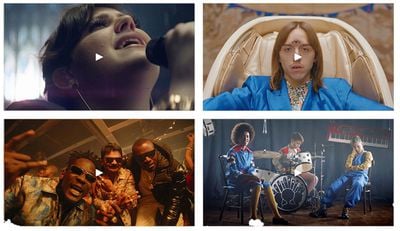 Platoon was founded in 2016 by Saul Klein, co-founder of defunct British video-on-demand service LoveFilm, and Denzyl Feigelson, who is a 40-year music industry veteran and has been advisor to Apple about matters related to iTunes and later Apple Music since 2003, according to his LinkedIn profile.

The startup reportedly worked with California singer Billie Eilish before she signed to Interscope in 2017. The 16-year-old recently debuted a new song "Come Out And Play" as the backdrop to Apple's "Share Your Gifts" holiday ad.

Feigelson will lead Platoon's team of 12 full-time employees from its London headquarters, where it has two recording studios, according to the report. Platoon is expected to continue supporting artists across areas including tour support, original content, social media marketing, and global expansion strategies.

A&R, for those unaware, is all about talent scouting and overseeing the artistic development of recording artists and songwriters. A&R representatives often act as a liaison between artists and record labels or publishing companies.

Typically when Apple makes an acquisition, it issues a statement that reads "Apple buys smaller technology companies from time to time, and we generally don't discuss our purpose or plans." Apple has yet to confirm the Platoon acquisition, however, and some acquisitions turn out to be acqui-hires instead.

If the acquisition did happen, though, it will likely aid the Apple Music team's ability to continue discovering original music from up-and-coming artists. Apple Music already highlights emerging artists through its "Up Next" program.

I would rather that Apple spends more money on the hardware that it produces.

For those of you playing MacRumors Bingo, please mark the “focus on hardware” box:

Plutonius
I would rather that Apple spends more money on the hardware that it produces.
Score: 14 Votes (Like | Disagree)

jjhny
Where are they going? It is like Apple is meandering about rudderless. Buying a music production startup?

Rebuild your main eco system of devices. They are wasting their technical talent on peripheral curiosities.

I feel like Apple is just lost and wandering. Luckily they had the inertia that the iPhone gave them after Jobs died. But they have to refocus on getting all their products back into the "insanely great" category.

(P.S. - If they use iTunes to sell these songs, I'll never be able to find them. Spend some money to fix that)

DocMultimedia
I sure hope someone at Apple has a big picture of their future. I really can't see it. Luckily, I don't run a big company.
Score: 6 Votes (Like | Disagree)

I would rather that Apple spends more money on the hardware that it produces.

kmm1482
Why do I get the feeling it will just turn into “Here’s more Drake and Taylor Swift!”?
Score: 4 Votes (Like | Disagree)
Read All Comments

Sunday February 5, 2023 6:07 am PST by Joe Rossignol
Apple has discussed selling a new top-of-the-line iPhone alongside the Pro and Pro Max models in 2024 at the earliest, according to Bloomberg's Mark Gurman. Based on this timeframe, the device would be part of the iPhone 16 lineup or later. In a September 2022 edition of his weekly "Power On" newsletter, Gurman said there was "potential" for an iPhone 15 Ultra to replace the iPhone 15 Pro...
Read Full Article • 476 comments