Apple Music Introduces 'Up Next' Feature to Promote New Artists

Thursday April 20, 2017 10:45 am PDT by Juli Clover
On its Apple Music Twitter account, Apple today announced a new "Up Next" feature for Apple Music, which is designed to promote "Music's Next Generation," highlighting a new artists each month.

For April, Apple is partnering with singer and rapper 6LACK for a range of projects to promote his latest album, FREE 6LACK. 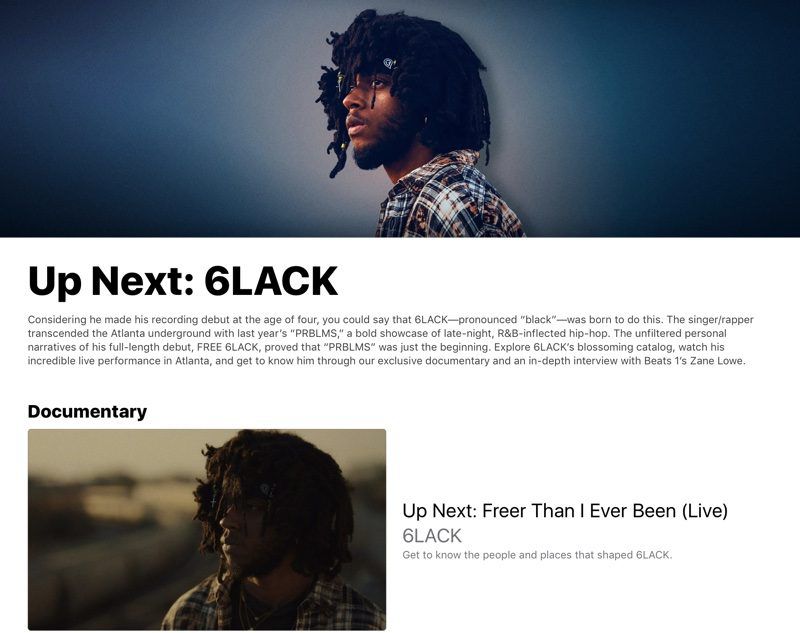 The new "Up Next" Apple Music section in iTunes features a documentary that delves into 6LACK's upbringing, the Free 6LACK album, a live performance, an interview with Zane Lowe, and several Apple Music playlists.

Both Beats 1 DJ Zane Lowe and 6LACK will also be on the Late Late Show with James Corden on April 20, presumably to talk about the new project and 6LACK's work.


Apple has done similar wide-ranging promotions for major album releases for well-known artists in the past, but its new Up Next feature gives the company a way to highlight and promote lesser-known artists in a major way.

Boatboy24
If you'd like your name to be pronounced 'black', begin it with the letter b. Otherwise, I will call you sixlack.
Rating: 28 Votes


I feel like all Apple Music does is hype Hip Hop and R&B.
Rating: 13 Votes

LordQ
What's the bet this will be all Hip/Hop and Rap...
Rating: 13 Votes

Cronowerx
I'm getting really sick and tired of Apple Music shoving black music down my throat... I don't want to see this when I open the music app! Why don't they do anything for trance, house, dance music... :mad:
Rating: 12 Votes

thisisnotmyname
I like features to help discover new artists and songs I may be interested in. This is nice but I generally prefer more targeted or algorithmic approaches. Suggestions based upon my listening habits when accurate are very much appreciated by me. Producing documentaries like this is great if the artist is of interest to me but it doesn't scale well to large audiences with diverse tastes.
Rating: 10 Votes

RamsayBolton
Hey Apple! There are other styles of music than (c)Rap and RnB!
Rating: 9 Votes

I'm getting really sick and tired of Apple Music shoving black music down my throat... I don't want to see this when I open the music app! Why don't they do anything for trance, house, dance music... :mad:

Lets sidestep the racial overtones in this comment, I'll guess you don't know the history of house and techno music. You know, Chicago and Detroit, predominantly black communities created the genres and scenes.
Rating: 9 Votes

redboxcar
Well, that's confusing because I thought it was the other "Up Next" feature where you can see which song is playing next.
Rating: 9 Votes