The individuals involved robbed Apple retail stores in 19 different counties, including several in the Bay Area, where Apple's headquarters are located. More than $1 million worth of Apple goods were stolen. 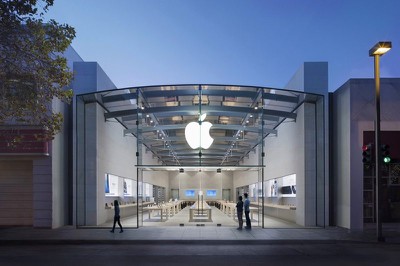 The robbers were known for wearing hoodies and storming Apple Stores in large groups to snatch up products that were on display "in a matter of seconds."

According to Attorney General Becerra, organized theft rings like the one apprehended this week "cost California business owners millions" and ultimately lead to consumers paying the cost.

Seven of those involved were arrested on Tuesday and booked into the Alameda County Jail, while another person is in custody in Sonoma County. The remaining nine suspects have yet to be arrested, but will be when located. Charges include plotting to commit grand theft against individuals.

mattyj2001
Where's the finesse? In my day, we would crawl through an air duct after hours and shimmy around lasers.
Score: 60 Votes (Like | Disagree)

AngerDanger
A million dollars? They must’ve stolen nearly a dozen Apple products! Maybe even one or two more!
Score: 41 Votes (Like | Disagree)

I hope all of these 17 "factory defects" never a chance to prove their defectiveness again.
Apple needs to install bars on the front that can drop down in seconds.
Also bars to block exit thru the back.
Trap the animals until the police/swat team arrive.

Effectively trapping customers along with the criminals...BRILLIANT!

You just created a scary situation where they just grab and go during business hours to a full blown hostage situation...BRILLIANT!
Score: 28 Votes (Like | Disagree)

There are also a scam where a girl goes in an Apple Store. She tells customers if she can borrow their phone because hers is not working and she needs to make a desperate call. She says she will try to put her SIM in the customer’s phone to call her friend. If she is successful she says she can’t get a signal and they need to go outside. Then her accomplice outside steals the customer’s phone from her hand and runs away.

Hmm, there are people stupid enough to fall for that? First, she’s literally in a phone store, and has to borrow a customer’s phone? Secondly, who swaps out the SIM first when borrowing someone else’s phone to make a desperate call? Thirdly... Whoever falls for that should win a Darwin Award.
Score: 20 Votes (Like | Disagree)

4jasontv
They were caught when police asked Johnny Appleseed to Find My Friend.
Score: 16 Votes (Like | Disagree)

Glockworkorange
Good. Make an example out of them.
Score: 8 Votes (Like | Disagree)
Read All Comments

Friday May 7, 2021 2:07 pm PDT by Juli Clover
Amazon today announced that it is teaming up with Tile to add Amazon Sidewalk integration to Tile's Bluetooth trackers. Amazon Sidewalk, for those unfamiliar, is a network of Amazon Bluetooth devices that's designed to improve the connectivity of devices like the Ring and Amazon Echo. Tile will now be joining Amazon Sidewalk, and through this integration, Amazon Echo and Ring devices will be ...
Read Full Article • 168 comments

Sunday May 9, 2021 2:00 am PDT by Sami Fathi
Zoom, a hallmark platform used by millions during the global health crisis, has been given access to a special iPadOS API that allows the app to use the iPad camera while the app is in use in Split View multitasking mode. This case of special treatment was first brought to attention by app developer Jeremy Provost, who, in a blog post, explains that Zoom uses a special API that allows the...
Read Full Article • 309 comments