Apple today seeded the twelfth beta of an upcoming iOS 12 update to developers for testing purposes, just four days after seeding the eleventh beta and more than two months after introducing the new software at the Worldwide Developers Conference.

Registered developers can download the new iOS 12 beta from Apple's Developer Center or over-the-air after installing the proper certificate, while public beta members should also be seeing the update as their tenth beta version of iOS 12. 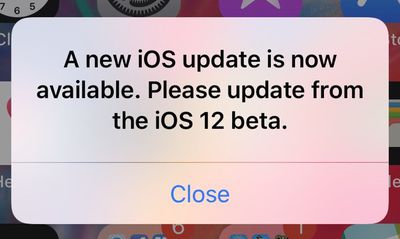 Based on the short interval and the odd time of day of the release, the update is almost certainly an emergency bug fix for the update alert bug that began popping up in earnest yesterday. Users were being prompted to update to a "new iOS update" every time they unlocked their phone or dismissed Notification Center.

On the iPhone X, there are new Animoji characters along with "Memoji," which are customizable, personalized, humanoid Animoji that can be used both in Messages and in FaceTime, and there are new camera effects in both of those apps.

Apple originally planned to introduce Group FaceTime support in iOS 12, but the feature was removed in iOS 12 beta 7 and will not be reintroduced until later this fall in a future update to iOS 12.

Siri is smarter in iOS 12 with a new Shortcuts feature that lets you create multi-step customized automations using first and third-party apps that can be activated with Siri voice commands. Shortcuts can be created through the Shortcuts app, available as a beta from Apple's Developer Center.

Apple built comprehensive time management and monitoring tools into iOS 12 with Screen Time, allowing you to keep track of how much time you're spending in apps on your iPhone and iPad. App limits can help you cut back on iOS device usage, and robust parental controls are included for families.


Apple News has a new Browse feature, the Stocks app has been redesigned and brought to the iPad, iBooks has been overhauled with a new look and a new name -- Apple Books -- and Voice Memos has been revamped with iCloud support and an iPad app.

The updated Maps app is available in the Northern California area during beta testing. After iOS 12 launches, Apple will continue rolling out the new maps to additional U.S. locations

New betas of upcoming operating system updates always introduce tweaked features and new functionality, and we'll be outlining what's new in the seventh beta below. We also rounded up all of the changes that were introduced in the previous betas: beta 2 and beta 3, beta 4, beta 5, beta 6, and beta 7.

Later betas have had fewer changes because we're approaching the end of the beta testing period, with a public launch for iOS 12 planned for September alongside new iPhones.

DeutscheMark
That‘s unfortunate, I kind of got used to it.
Score: 36 Votes (Like | Disagree)

ignatius345
So, I guess this notification is technically correct now.
Score: 28 Votes (Like | Disagree)

I8P'CS
Say what you want about apple but they addressed this QUICKLY!!! Well done!!!
Score: 15 Votes (Like | Disagree)

Beta 11 easily the worst iOS12 beta. And all because of an alert window.

Good luck with your recovery from that ordeal.
Score: 12 Votes (Like | Disagree)

That‘s unfortunate, I kind of got used to it.

SuperMatt
Our long national nightmare is finally over.
Score: 10 Votes (Like | Disagree)
Read All Comments