Apple appears to have recently updated Siri on iPhone, iPad, Mac, and HomePod with a slew of new jokes to tell. Based on reports on Twitter and from MacRumors readers, the new jokes started rolling out earlier this month.

When you ask Siri a question like "tell me a joke" on an iOS device, Mac, or the HomePod, Siri has dozens of fresh responses to share with you. 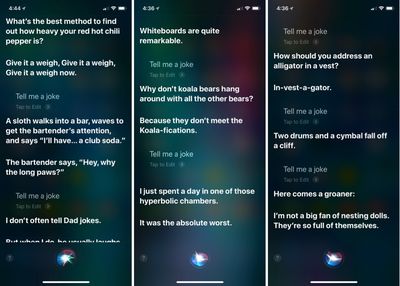 With the humorous new additions, Siri's joke repertoire has expanded significantly, and you need to ask for jokes several times before hearing a repeat. Siri also appears to have new knock knock jokes, accessible by asking Siri "knock knock."

Apple updates Siri on a regular basis with new content in an effort to instill the personal assistant with personality and expanded capabilities. In February of 2017, for example, Siri promoted the LEGO Batman Movie with a series of funny responses to the query "Hey Computer," and when Pokémon Go was released, Siri was updated with several Pokémon-related responses.

Siri is often criticized for shortcomings in comparison to AI-based offerings from competing companies like Microsoft, Amazon, and Google, which is said to be due to Apple's heavy focus on protecting user privacy.

Apple is aiming to make major improvements to Siri, however, and has recently hired former Google AI chief John Giannandrea and the team from Init.ai, a customer service startup focused on creating AI with natural language processing.

scrapesleon
There’s a lot of things to fix about Siri making her learn new jokes should be last on the agenda
Score: 66 Votes (Like | Disagree)

Although the jokes are actually funny, she is still useless. Telling me a freaking joke will not add stuff to my calendar, turn on my alarm, and any other basic thing she should do, any better
Score: 32 Votes (Like | Disagree)

kahkityoong
Siri IS the joke.
Score: 21 Votes (Like | Disagree)

nt5672
I am just surprised that they did not hold this new functionality for a Keynote speech from Cook. "Its incredible!"
Score: 10 Votes (Like | Disagree)
Read All Comments

Monday January 23, 2023 10:09 am PST by Juli Clover
Apple today released macOS Ventura 13.2, the second major update to the macOS Ventura operating system initially released in October. macOS Ventura 13.2 comes more than a month after macOS Ventura 13.1, an update that added the Freeform app and other changes. The ‌macOS Ventura‌ 13.2 update can be downloaded for free on all eligible Macs using the Software Update section of System...
Read Full Article • 123 comments

Tuesday January 24, 2023 1:11 pm PST by Joe Rossignol
While the new Mac mini with the M2 chip has a lower $599 starting price, the base model with 256GB of storage has slower SSD read and write speeds compared to the previous-generation model with the M1 chip and 256GB of storage. A teardown of the new Mac mini shared by YouTube channel Brandon Geekabit reveals that the 256GB model is equipped with only a single 256GB storage chip, while the...
Read Full Article • 532 comments

Tuesday January 24, 2023 10:10 am PST by Juli Clover
Apple today released tvOS 16.3, the third major point update to the tvOS 16 operating system that originally came out in September. Available for the Apple TV 4K and Apple TV HD, tvOS 16.3 comes six weeks after tvOS 16.2, an update that added Apple Music Sing. The tvOS 16.3 update can be downloaded over the air through the Settings app on the ‌‌‌‌Apple TV‌‌‌‌ by going to System > Software...
Read Full Article • 41 comments