The LEGO Batman Movie, released last Friday, features the voice of Apple's personal assistant Siri as Batman's personal computer. Batman's computer works in much the same way as Siri, responding to his voice requests whenever he says "Hey 'puter."

As it turns out, there's a secret tie-in hidden in the iPhone, too. Whenever you say "Hey 'puter" (or "Hey Computer") to Siri, she responds to you as if you're LEGO Batman.


"I am at your service, Lego Batman sir," and "Welcome home, sir. I have your rom coms queued up, sorted by decade," are just two of the multiple humorous phrases Siri shares whenever the personal assistant hears "Hey 'puter." 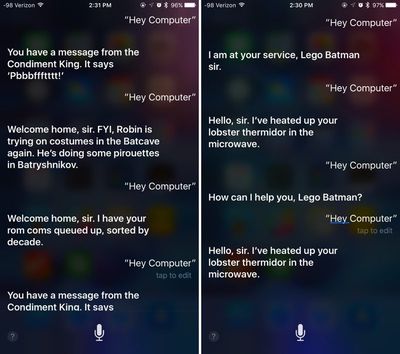 Apple updates Siri on a regular basis, and this isn't the first time the personal assistant has gained humorous responses ahead of an upcoming event, but it may be the first serious movie tie-in.

Siri was previously updated in August 2016 to offer funny responses to questions about Pokémon Go, and again in September to respond to questions ahead of the iPhone 7's debut.

In addition to the Siri easter egg, there's also a free iOS app that accompanies The LEGO Batman Movie, which was released back in January.

Advertisements in Siri... can't innovate, my ass!!! Excellent use of staff resources, TC.

Oh yeah, adding one quote to a database list sure takes a ton of resources.
Score: 9 Votes (Like | Disagree)

QzzB
I don't like the idea of advertising in services such as Siri, but the Batman one isn't really advertising. Its not pushing you to Batman movie trailers or tickets.

Do think its is a slippery slope though, hopefully Apple won't start advertising or using keywords in Siri
Score: 8 Votes (Like | Disagree)

Dilster3k
Literally just got back from the cinema... Very entertaining and well thought out movie, and not only for Bat-fans. Fantastic hilarious movie!
Score: 8 Votes (Like | Disagree)

CAO 303
Siri's role in the original Lego Movie is closer to my Siri experience.

Benny: "Disable the shield!"
Siri: "Searching for Albanian restaurants."
Benny: "You are undermining me!"
Siri: "Which phrase would you like me to underline?"
Score: 5 Votes (Like | Disagree)