Apple didn't live stream today's education-focused event held at Lane Tech College Prep High School in Chicago, but the company has made a video available in the Events app of the Apple TV now that it's over.

The video spans an hour and seven minutes, and while Apple mainly focused on educational topics, it does include the unveiling of the new low-cost $329 sixth-generation iPad, which comes equipped with Apple Pencil support. 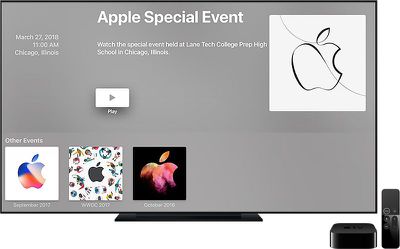 Apple has not yet made the event available to watch on its website, but a video should be uploaded and available soon, and a direct link to the video is available here. A YouTube version may also come later in the day.

In addition to its main event, Apple has shared several new iPad-focused YouTube videos that were shown during the Chicago event.


The first video, above, focuses on the Apple Pencil being used to draw the new iPad, highlighting Apple Pencil integration in the low-cost tablet. The other two videos focus on students using the new iPad for school work and Apple's commitment to education.

In addition to a new low-cost iPad with Apple Pencil support, Apple today also introduced new tools for teachers and students, including a Classwork app for assignments, a ClassKit API for creating educational apps with Classwork integration, new Apple Pencil capabilities for iWork, and an "Everyone Can Create" curriculum that's similar to "Everyone Can Code" but is more focused on creative pursuits like photography, video making, music, and art.

Don't want to watch Apple's full hour-long presentation? We'll have a recap coming soon that covers all of the interesting points of the event, so stay tuned for that.

CarpalMac
51 years I have suffered from insomnia. Finally, I think this here might just be my cure.

"Only Apple can do this."

What an apocalyptic, egotistical, smug, self congratulating phrase. And people on here wonder why so many others are critical of them.
Score: 21 Votes (Like | Disagree)

yaxomoxay
Can’t believe I am saying this, but I am pretty sure I’ll skip this. 1 hour of my life is definitely more precious to waste it for this.
Score: 13 Votes (Like | Disagree)

Have to disagree. It USED to be a status symbol. That is when Steve was running the business. Now its run by some hoohaw named Tim who doesn't have a clue. Steve brought us the Mac, the iPhone, and the iPad.....Timmy brought us a $1,000 iPhone, a carbon copy of Steve's iPad, and less we forget a $10,000 watch. Yeah he's a winner alright.
Score: 10 Votes (Like | Disagree)

hajime
Apple should have shown videos of children throwing the iPad at each other to see how durable it is.

Apple should have also shown videos of children fighting each other using Apple Pencil.

I hope the children won't stick the Apple Pencil into each other's as*. I know kids were sent to the hospital because somebody stuck his/her finger in it.
Score: 7 Votes (Like | Disagree)

mikecorp
This was the crappiest event ever. Mr T. Crapper is doing something wrong.
Score: 7 Votes (Like | Disagree)

You’re unfair on the watch. It’s a great product, and using the $10K example is misleading at best.

Ok it may be a little misleading, but the fact is he had the audacity to think a $10,000 watch would be well received. Face it he's not in touch with what consumers want as much as Steve was.
Score: 7 Votes (Like | Disagree)
Read All Comments