Grove Press this week announced that Lisa Brennan-Jobs, the eldest daughter of late Apple co-founder Steve Jobs and artist Chrisann Brennan, is working on a memoir about her childhood spent between two imperfect but extraordinary parents. The news was first reported by the Associated Press. 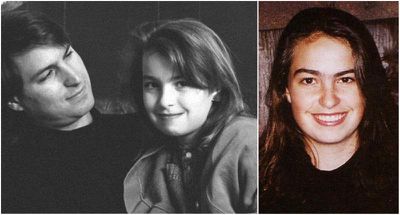 Lisa Brennan-Jobs and Steve Jobs via BHW
In the book, titled Small Fry, Brennan-Jobs recounts how Jobs was "rarely present" in the early years of her life, as he denied paternity. As she grew older, however, Jobs began to show an interest in her and apologized for his behavior.

The memoir's description notes that Jobs ushered his daughter into a "new world of mansions, vacations, and private schools." Brennan-Jobs was "thrilled" to receive attention from her father, but he could be "cold, critical and unpredictable" at times, echoing stories about his management style at Apple:

When she was young, Lisa's father was a mythical figure who was rarely present in her life. As she grew older, her father took an interest in her, ushering her into a new world of mansions, vacations, and private schools. His attention was thrilling, but he could also be cold, critical and unpredictable. When her relationship with her mother grew strained in high school, Lisa decided to move in with her father, hoping he'd become the parent she'd always wanted him to be.

Brennan-Jobs, 39, graduated from Harvard University in 2000 and is now a professional writer. Jobs named the Apple Lisa, released one year before the original Macintosh, after her. She has three half-siblings, including Reed Jobs, Erin Jobs, and Eve Jobs, from Jobs's later marriage to Laurene Powell.

Small Fry is scheduled for release in September, according to the Associated Press and a listing on the HarperCollins Canada website.

macduke
My wife and I both have horrible fathers. If you're going to get a woman pregnant, you need to be prepared to put your life on hold. I couldn't imagine any scenario where I would abandon my daughter. Fathers who do this are *******s. There is no sugar coating it. We need to stop saying "But they're really successful, etc so it's okay." It is never okay. It is completely unacceptable, full stop.
Score: 39 Votes (Like | Disagree)

Most brilliant minds are "cold, critical, and unpredictable." I'm glad they had a relationship later on as daughters need their fathers to show them how men should treat them.

I don't think that's necessarily true, it's just the image we're familiar with and thus what we notice. There are plenty of brilliant people out there who aren't jackasses or cold people inside, but that's not as newsworthy as the maverick genius stereotype.
Score: 20 Votes (Like | Disagree)

My wife and I both have horrible fathers. If you're going to get a woman pregnant, you need to be prepared to put your life on hold. I couldn't imagine any scenario where I would abandon my daughter. Fathers who do this are *******s. There is no sugar coating it. We need to stop saying "But they're really successful, etc so it's okay." It is never okay. It is completely unacceptable, full stop.

I understand your emotions on this one, but as someone whose father was absent as a kid, I disagree. I’m glad I was raised by people who did so out of choice, than by someone who was coerced into being a dad out of a misplaced sense of “duty” or whatever. (And I think my dad’s a great guy, for what it’s worth)

My wife and I both have horrible fathers. If you're going to get a woman pregnant, you need to be prepared to put your life on hold. I couldn't imagine any scenario where I would abandon my daughter. Fathers who do this are *******s. There is no sugar coating it. We need to stop saying "But they're really successful, etc so it's okay." It is never okay. It is completely unacceptable, full stop.

canny
Good to see Arab-Americans in positive news for a change.
Score: 10 Votes (Like | Disagree)

Kabeyun
Fine to sympathize with Lisa, although I don’t know if she’s looking for sympathy. But let’s not pile on with a character assassination of a man we’ve never met involving details we don’t know. Let he who is without sin cast the first stone.
Score: 8 Votes (Like | Disagree)
Read All Comments