Chinese Report Expects 11-Inch iPad Pro at WWDC, No New iPhones Until Second Half of 2018

Apple is planning to release a new iPad Pro with a display that measures about 11 inches, according to Taiwan's Economic Daily News. 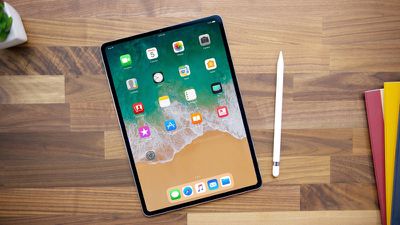 Details are hard to gather from a loose translation of the Chinese report, which says the 11-inch iPad Pro and an updated 12.9-inch iPad Pro are likely to be released at Apple's annual Worldwide Developers Conference in June, echoing an earlier prediction from Rosenblatt Securities analyst Jun Zhang.

Both new iPad Pro models are expected to feature Face ID and faster eight-core Apple A11X processors. It's unclear if the tablets will have notches for the TrueDepth system, or a slimmer, uniform top bezel that still has enough room to house the camera and sensor technology that powers the facial recognition.

The report, citing a source, adds that Apple has no new iPhone models planned for the first half of 2018, dampening hopes for an iPhone SE refresh. The first new models of the year will likely be the so-called iPhone X2, iPhone X2 Plus, and a 6.1-inch aluminum iPhone with Face ID in September.

KGI Securities analyst Ming-Chi Kuo had already cast doubt on rumors about a second-generation iPhone SE launching in the first half of 2018. He said Apple was likely to focus its development resources on the trio of iPhone X-like models expected to launch in the second half of the year.

The current iPhone SE looks much like the iPhone 5s, including a smaller four-inch display, preferred by a subset of customers. The device is powered by Apple's A9 chip, like the iPhone 6s and iPhone 6s Plus, and it has 2GB of RAM, a 12-megapixel rear camera, a 3.5mm headphone jack, and Touch ID.

Apple hasn't fully refreshed the iPhone SE since it launched in March 2016, but it did double its available storage capacities to 64GB and 128GB last March. It also dropped the device's starting price to $349 last September.

Blackstick
iPhones in the second-half? Let's say, around September? You don't say!
Score: 21 Votes (Like | Disagree)

MrGimper
Seems like Apple decided that the most important thing to copy from Android, is fragmentation.
Score: 15 Votes (Like | Disagree)

Before people complain about the lack of an SE update, see it as a chance for them to include an A11 later rather than an A10 now.

The problem with this idea is that we all have iPad Mini and Mac Mini experiences too (and some have Mac Pro experiences)...

"Before people complain about the lack of a Mac Mini update, see it as a chance for them to include Skylake, no Kaby Lake, no Coffee Lake". And where's a quad-core" processor? And the wait just ticks on and on, now 1,244 days since last release (which, by the way, many considered a step back from the 2012 Mac Mini by Apple taking key things away, rather than tangibly upgrading the 2012)

FYI: there's a post on this site called "The new Mac Mini is almost certainly coming ('https://forums.macrumors.com/threads/the-new-mac-mini-is-almost-certainly-coming.1681773/')" started Dec 7, 2013 with 11,862 replies (in 475 pages) and well over 1.5M views. It's packed full of enthusiasm for a new Mac Mini that flares up over and over in new Mini anticipation, only to be dashed by Apple opting to do nothing... again... and again.

Same with iPad Mini: still for sale with an amazing A8 processor, when Apple has since rolled out an A9, A10 and A11. It's now 357 days since the last release (and A12 likely about 6 months from release). In countless threads, you can see people writing much enthusiasm about buying a "5" as soon as Apple would roll one out... how it's the "perfect" tablet form factor and how the new iPhone phablet and/or the bezel-less iPad still have the big hole in the in-between sizes that a refreshed mini would fill.

I'll hope right with you but Apple sets an example of losing interest in select products and letting them just wait and wait and wait on updates. It very well could be that Apple is right on top of anticipating the latest & greatest chips but history shows a lot of latest & greatest coming & going. What's different this time?
Score: 15 Votes (Like | Disagree)

The problem is that they aren't connecting to the consumers.

There are 3 different tiers of iPad "needers" in the world (might be more, but you can slim them down into these categories):

• Document users--the 12.9" simulates legal-sized paper, so it is fine for compressing volumes of paperwork down into an identical size screen. Imagine carrying around large books of piano music, and now you can have 2000x that much in an iPad. Same for anyone that needs access to documents.

Apple has significantly more market research data for iPad models and all products than your total speculation nonsense.
Score: 14 Votes (Like | Disagree)

krause734
I still wish they called it the MaxiPad
Score: 10 Votes (Like | Disagree)
Read All Comments