Apple is working on a new high-end 2018 iPad that will adopt many of the design elements from the revamped iPhone X, reports Bloomberg. The new tablet device, which is likely to be a "Pro" model, will reportedly do away with the Home button. 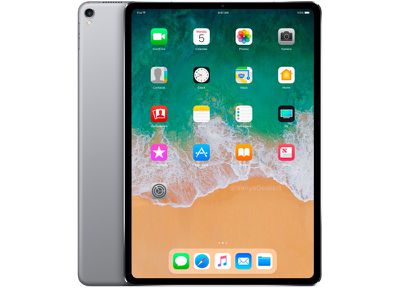 iPad Pro render via Benjamin Geskin
It will feature slimmer edges, a faster processor, a custom Apple-built GPU, and built-in support for Face ID, allowing it to be unlocked with a facial scan much like the iPhone X. With Face ID, there's no need for a Touch ID Home button.

By removing the home button, Apple plans to noticeably reduce the size of the edges on the top and bottom of the device for the first time since its introduction in 2010, bringing the design closer to that of the recently released flagship iPhone X. The new version will mark the first revamped look for the iPad since the first iPad Pro debuted in 2015.

While the new 2018 iPad is said to be adopting many iPhone X features, Bloomberg's sources do not believe it will feature an OLED display. Instead, it will continue to use an LCD, likely because Apple suppliers are still working on ramping up OLED production. Samsung continues to be the only display maker capable of producing OLED displays suitable for an iPad, but technical and financial constraints will prevent Apple from adopting OLED at this time.

iPad Pro render via Benjamin Geskin
A new version of its Apple Pencil and new "software tools" for using the stylus are also said to be in development alongside the new iPad model.

According to Bloomberg, the revamped iPad is expected to be released "a little more than a year" after the prior iPad Pro update, suggesting it could see a launch sometime around September. Apple refreshed its iPad Pro lineup in June of 2017 at the Worldwide Developers Conference.

Ok I love my X, but an iPad shouldn't have a notch.

I agree...Not sure why people on here are now 'liking' the Notch. I swear if any other company had a the Notch, they'd say it's the ugliest thing ever.
Score: 47 Votes (Like | Disagree)

Crosscreek
Gonna need more than one ID for family.
Score: 44 Votes (Like | Disagree)

Why would anyone buy an iPad anymore - so lame

Oh I don't know, only because it's the best manufactured tablet on the market that does everything my laptop can do and more. It's the best device I own in my household.
Score: 31 Votes (Like | Disagree)

Ayemerica
Ok I love my X, but an iPad shouldn't have a notch.
Score: 31 Votes (Like | Disagree)

raskar
and another price hike of circa 35% :confused:
Score: 30 Votes (Like | Disagree)
Read All Comments