Apple's rumored iPad Pro with Face ID will likely be released in the second quarter of 2018, according to Rosenblatt Securities analyst Jun Zhang. 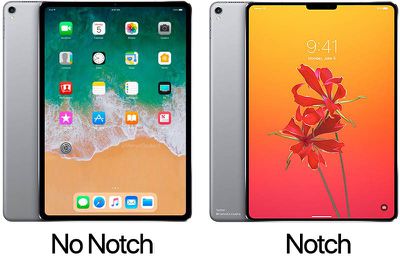 Zhang expects the revamped iPad Pro to have slimmer bezels and no home button, in line with the iPhone X. The revamped design will likely be featured on both the 10.5-inch and 12.9-inch iPad Pro, although his research note didn't specify.

The 10.5-inch iPad Pro and second-generation 12.9-inch iPad Pro launched in June 2017, so it's not entirely clear if "a little more than a year" meant WWDC 2018 or Apple's annual September event where it introduces new iPhones.

The new iPad Pro models will likely retain LCDs instead of OLED displays due to supply, cost, and technological constraints. It's unclear if the tablets will have a notch for the TrueDepth sensor housing, or if the device will have uniformly slim bezels on all four sides with enough room for the components.

A supply chain report out of China recently claimed the new iPad Pro models will be faster thanks to an octa-core A11X Bionic chip with three high-performance "Monsoon" cores and five energy-efficient "Mistral" cores.

There's no word on potential pricing yet, but the new iPad Pro lineup will likely cost more than the current 10.5-inch and 12.9-inch models, which start at $649 and $799 respectively in the United States. Since the new models won't have OLED displays, however, the price increase might not be substantial. Apple is also rumored to release a new 9.7-inch iPad for $259 in March, while the fate of the iPad mini remains uncertain.

PastaPrimav
1. Notch isn't necessary to accomplish this on iPad, that should be common sense. But getting it working in landscape is.

BMcCoy
Glad I picked up a current gen iPad Pro 10.5 recently..
It might be the last iPad to have TouchID. I'm not yet convinced FaceID is better/faster/easier, so pleased that I have TouchID iPad.
Score: 17 Votes (Like | Disagree)

Notch or no notch I don’t care. Just give me no bezels.

I'm not sure that no bezels is ideal on the larger iPads. it will make holding the device quite tricky with your hands touching the side of the screen etc....

T'hain Esh Kelch
When it comes to the iPad, I'd prefer a bezel so I have something to hold on to. I handle my iPad very differently from an iPhone.
Score: 14 Votes (Like | Disagree)

Scottsoapbox
I'm less concerned about an iPad notch as my hand will cover it and part of the added screen in that mockup. Tablets need some bezel. :rolleyes:
Score: 13 Votes (Like | Disagree)

I'm so glad that I have the last iPad Pro 512 to tide me over... indefinitely it appears.

FWIW I don't care how it looks. I use my iPad exclusively in portrait orientation, and I use the Touch ID VERY frequently to approve my kids' purchases. I won't be typing that password in every time again.
Score: 10 Votes (Like | Disagree)
Read All Comments

Saturday February 4, 2023 10:05 am PST by Eric Slivka
Online retailer TigerDirect has slashed pricing on the M1 iPad Air in several colors, offering the base 64GB configuration for just $313.99 in Purple and Pink. Note: MacRumors is an affiliate partner with TigerDirect. When you click a link and make a purchase, we may receive a small payment, which helps us keep the site running. That's a savings of 48% compared to Apple's normal $599.00...
Read Full Article • 548 comments

MicroLED Apple Watch Ultra Appears to Be Slated for 2025