Apple Reportedly Planning to Release Most Affordable 9.7-inch iPad Ever in Late 2018

Apple is "considering" releasing an updated low-cost 9.7-inch iPad next year with a starting price that's $70 cheaper than its existing equivalent, according to sources from upstream suppliers.

In March 2017, Apple released its most affordable iPad, a $329 entry-level 9.7-inch device with internal specs similar to the iPad Air 2, but with a thicker and heavier enclosure. According to DigiTimes, Apple's 2018 version of the 9.7-inch iPad could cost even less at around $259, in a bid to attract more demand from price-oriented consumers and maintain its current tablet shipments of 10 million units a quarter. 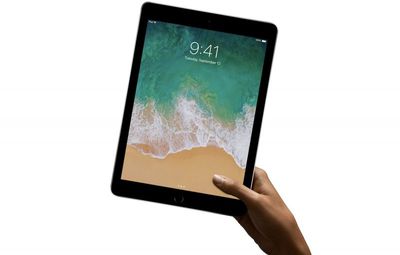 With the new device, the sources expect the tablet market to witness a new wave of price competition among first-tier players including Samsung Electronics, Amazon, Huawei and Lenovo.

The sources pointed out that Apple's new iPad may arrive in the second quarter of 2018 and in addition to regular consumers Apple is also looking to expand the inexpensive iPad into the industrial and service sectors.

In its November earnings call, Apple reported double-digit unit growth in iPad sales for the second consecutive quarter, but did not provide a breakdown of sales across tablet models. Prior to that, in June, the company reported sales of 11.4 million iPads, an increase of 15 percent compared to the year-ago quarter. iPad revenue was also up, but only 2 percent year over year, suggesting Apple was selling a lot of new lower-priced 9.7-inch iPads in particular.

The worldwide tablet market declined for a tenth straight quarter on a year-over-year basis during the first months of 2017. When the news broke in May, Apple reported that it sold 8.9 million iPads in the quarter, down from 10.2 million iPads in the same period the year previous, marking the 13th consecutive quarter that it had sold fewer iPads on a year-over-year unit basis.

According to the sources cited today, Apple's aggressive pricing strategy with the next 9.7-inch iPad aims to offset the continuing overall decline, which has seen most second- and third-tier brand vendors already step out of the market.

According to the same sources, Apple is likely to outsource the production of the new 9.7-inch iPad to Compal Electronics, while giving the device's PCB orders to Compeq and Unitech Printed Circuit Board. However, all the companies declined to comment on their orders or clients.

move along kids. nothing to see here.
Score: 24 Votes (Like | Disagree)

mozumder
They really could use the production cost savings to sell a low-priced Mac/Macbook. The cheapest iMac is still $1100, and the cheapest Macbook is $1300! Compare this to a world where PC laptops are now $400...
Score: 16 Votes (Like | Disagree)

Christoffee
It’s also going to hook people in young. Th iPhone SE is priced reasonably as a gift for your 14 year old. A £250 iPad (before discount - I picked up a £270 iPad this weekend) is reasonable for a children’s iPad around the house, rather than the old iPad 2 or mini that they’re using.

The young will know nothing but iOS.
Score: 15 Votes (Like | Disagree)

The $249 iPad this past Black Friday /cyber Monday was a huge seller, I replaced my wife’s iPad Air 1 with one, sold the Air 1 on eBay for $140... now she has a new iPad that’ll last another four years for just over $100, how could you not?

As a dad of two daughters, non pro iPads below $300 are amazing and demolish the competition in that price range. My dad spent at least $1500 on my first Dell in the late 90s, and I was 14 years old.

Comparing the two, the Samsung tablet isnt junk. It is 2mm thinner, 100g lighter, has a laminated screen, and has a OLED screen.

I understand people have a preference for software, just like they do for favorite colors. That doesn't make android junk, just different.
Score: 10 Votes (Like | Disagree)

They really could use the production cost savings to sell a low-priced Mac/Macbook. The cheapest iMac is still $1100, and the cheapest Macbook is $1300! Compare this to a world where PC laptops are now $400...

And Apple is still doing extremely well. Just like other brands that sell things at a higher price.
Score: 7 Votes (Like | Disagree)
Read All Comments