When the HomePod launches, it will receive regular updates much like Apple's iOS devices, Macs, Apple TVs, and Apple Watch models. Apple hasn't shared details on how these updates will be installed, but some digging into the iOS code by 9to5Mac has revealed that updates will be available via Apple's dedicated Home app for HomeKit devices.

As we learned before the launch of the HomePod, the speaker runs a version of iOS, and it's actually a lot like an iPhone sans display. Because it's running an iOS variant, we can expect the HomePod to receive updates right alongside iOS devices. 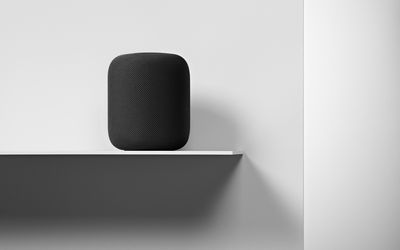 Apple employees have been testing the HomePod for months, and in that time, Apple has released several software updates for the device. The latest updates have indeed coincided with iOS releases, and the last HomePod software update came when iOS 11.2.5 was released. When it launches on February 9, the HomePod will likely be running its own dedicated version of iOS 11.2.5.

When a new software update is released for the HomePod, users will receive an alert and will likely be directed to the Home app to install it, similar to how Apple Watch updates are installed through the Watch app. HomePod will be listed as an available HomeKit device in the Home app.

HomePod update screenshot via 9to5Mac
As with the Apple TV, there will be a setting to enable automatic HomePod updates, and updates will be available for either a single HomePod or multiple HomePods if you have more than one.

The first update to the HomePod may be iOS 11.3, and that update is expected to introduce key features Apple wasn't able to make available ahead of its launch. When the HomePod launch date was announced, Apple said multi-room audio and support for pairing two or more HomePods together for stereo sound, two features requiring the not-yet-implemented AirPlay 2 protocol, would come in an update set to be released later this year.

Apple implemented AirPlay 2 features in iOS 11.3, which suggests we won't be waiting too long to see new functionality in the HomePod. iOS 11.3 is expected to see a spring launch, which means anytime between March 20 and June 21, if we're going by the dates for spring 2018 in the Northern Hemisphere.

HomePod is available for purchase from Apple for $349, and the first HomePod orders will be in the hands of customers on February 9, the official launch date for the device.

Over the course of the last week, we've learned several new details about the HomePod from hands-on first impressions and additional information released by Apple, so make sure to check out our HomePod roundup for an updated overview of the speaker with everything you need to know about it.

Waiting for Airplay 2 and multi speaker setup is stupid. They already delayed the hardware itself.

Inconvenient yes, not stupid. Stupid would be releasing it when it’s enabled but not working due to lack of testing and quality assurance.

I’m happier to wait for a working product rather than one that’s not
Score: 16 Votes (Like | Disagree)

W00t, that expensive, and not even stereo sound... bwaahaha

It definitely has stereo sound... from a single speaker. It uses its array of speakers to distribute different sounds in different directions. It's actually more natural than sound emanating from two distinct fixed points. And add a second HomePod to take that to the next level, multidimensional stereo sound.
Score: 8 Votes (Like | Disagree)

I really hope it's a flop, so they learn a thing or two

People like this are bizarre. Imagine wanting devices you're not interested in to fail (Apple Watch thread, AirPods thread, full of these sort of people) just let people buy the devices they want to buy and stop being so negative about everything.
Score: 6 Votes (Like | Disagree)

It definitely has stereo sound... from a single speaker. It uses its array of speakers to distribute different sounds in different directions. It's actually more natural than sound emanating from two distinct fixed points. And add a second HomePod to take that to the next level, multidimensional stereo sound.

We keep posting this but Apple themselves IN WRITING says the path to stereo is by buying 2 (TWO) HPs. A clip of that right off of Apple's site is in the original post of this thread. I don't know why we keep trying to do this but every thread gets the same posts. I guess some of us know better than Apple and apparently even want to call Apple a liar about their own product. :eek:
Score: 6 Votes (Like | Disagree)

Mike MA
I like the idea to see HomePod getting more mature and receiving additional features with the upcoming updates. Let‘s see what will come next.
Score: 5 Votes (Like | Disagree)

The speaker quality is not that good. Audiophiles won't want this. Siri is not that accurate or useful. I don't need to turn lights on/off with my voice or pay for expensive smart home stuff like The Nest (I regret buying, it has a mind of it's own). Returned my Alexa. It was more of a pain than useful. They have a long ways to go before this stuff is useful. I look forward to it when they figure it out.

I haven’t used a light switch in my house in 6 months and I couldn’t be happier. There’s something to say about the lights coming on whenever you get home. You never have to walk into a dark house. I can lay down in bed and just say goodnight to Siri or Alexa and the whole house goes dark. So I would like to argue that this stuff isn’t useful. It’s a huge up front investment but it’s about as useful of an upgrade as you can make to your house.
Score: 4 Votes (Like | Disagree)
Read All Comments