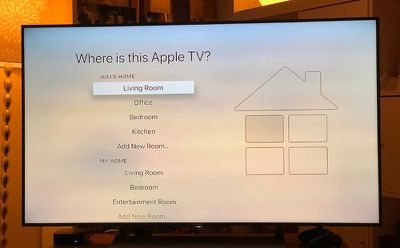 For example, with two Apple TVs running tvOS 11.3 set up in different rooms in the house, you can use the iPhone to play the same song on both, successfully using the multi-room audio feature of AirPlay 2.

Installing tvOS 11.3 prompts you to add your Apple TV to your HomeKit setup, and you'll be asked to choose a room for it during the setup process. After that's done, the Apple TV is displayed as an available device in the Home app. You can't do much with Apple TV in the Home app, but you can play and pause music.

Announced as part of iOS 11 back in June when the operating system was first introduced, AirPlay 2 introduces features like multi-room audio playback from iOS devices and improved buffering.

AirPlay 2 functionality is limited to devices running the current iOS 11.3 and tvOS 11.3 developer betas, so it basically only works with the Apple TV right now. AirPlay 2 has not yet officially been released by Apple, but in the future, third-party speakers and Apple's own HomePod will support the feature. When AirPlay 2 compatible devices are widely available, you will be able to use AirPlay 2 to control all of the different speakers and devices located throughout your home, for a full multi-room audio experience.

Apple hasn't provided specific details on when the HomePod will be updated with multi-room support beyond stating that it will come in a later update, and AirPlay 2 was missing from the detailed rundown of iOS 11.3 features that Apple shared this morning ahead of the beta's release, so Apple's plans aren't quite clear.

At the current time, AirPlay 2 on iOS 11.3 and tvOS 11.3 is rather buggy and the implementation is clearly incomplete, but Apple will likely make significant improvements over the iOS 11.3 beta testing period.

DisNerd
And a firmware update for airport express? Please?
Score: 17 Votes (Like | Disagree)

ipedro
I hope that you’ll be able to add an AppleTV to automations.

Examples:
- good night scene turns off the TVs in the house
- arriving home, turns on the tv and starts an Apple Music playlist.
- wake up to the news.
Score: 11 Votes (Like | Disagree)

Why do I want to play the same song on multiple TV's with ****** speakers?

I am sure this is mostly released and needed for HomePod for multi-room audio, but this is why Apple boggles me because something called an Apple "TV" product should do "TV" things well, and not stick on features for it to be used as a mediocre audio gateway. I mean I can buy two ChromeCast Audio's to get multi-room audio for about 1/4 the price of a new Apple TV, and 1/8 the price of TWO of them, and Google already supported multi-room audio over WiFi a year ago.

Obviously the real benefit that would make AirPlay 2 work well for Apple TV would be to use with wireless speakers for easier surround sound setup but to rush this feature to market so people can play a song on multiple TV's is silly.

You realize not everyone uses garbage TV speakers or sound bars with their ATV's right? My ATV is hooked up to my entertainment center with a several thousand dollar surround sound setup. As soon as Apple gets their act together and finally releases AirPlay 2 (I don't do betas), I'm going to add a set of bookshelves and maybe a sub to the bedroom TV so that I can get a start on multi-room audio. Many people are looking forward to AirPlay 2 on the ATV because they have the equipment to take advantage of it.
Score: 7 Votes (Like | Disagree)

I hope that you’ll be able to add an AppleTV to automations.

Examples:
- good night scene turns off the TVs in the house
- arriving home, turns on the tv and starts an Apple Music playlist.
- wake up to the news.

BWhaler
So how far behind is iOS 12 given Apple is still finishing iOS 11 features?

Or will it be a Bug Fixing year? (And hopefully a real one, as the big this year are brutal.)
Score: 3 Votes (Like | Disagree)

Slix
Other than the queuing songs feature and the “improved buffereing”, what different is this from playing music through multiple AirPlay speakers with iTunes? Been doing that for over 10 years.
Score: 3 Votes (Like | Disagree)
Read All Comments