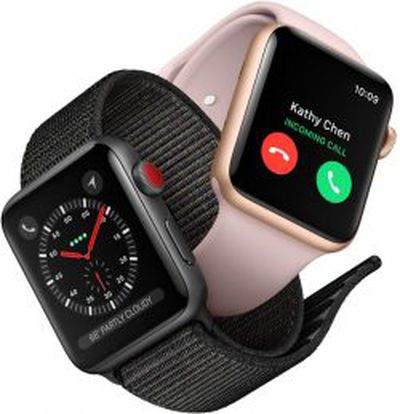 Apple is investigating a fix for an issue where an Apple Watch Series 3 with LTE may stay connected to unknown Wi-Fi networks with no connectivity, at times preventing the watch from using cellular, it has told The Verge.

"We have discovered that when Apple Watch Series 3 joins unauthenticated Wi-Fi networks without connectivity, it may at times prevent the watch from using cellular," an Apple spokesperson said in an emailed statement. "We are investigating a fix for a future software release."

In her Apple Watch Series 3 review, The Verge editor Lauren Goode said, on more than one occasion, the watch would connect to a single bar of an unknown Wi-Fi signal, and remain on that network rather than switching to LTE.

On more than one occasion, I detached myself from the phone, traveled blocks away from my home or office, and watched the Watch struggle to connect to LTE. It would appear to pick up a single bar of some random Wi-Fi signal, and hang on that, rather than switching to LTE.

Goode explains further in her review:

The way the LTE version of the Watch is supposed to work is that it will "hand off" from your smartphone's connectivity to whatever other type of connectivity is available. In some cases, like when you're in a place with a Wi-Fi network you've connected to before, this will be Wi-Fi. In other cases, like when you're out without your phone, and you're nowhere near a known Wi-Fi network, this will be LTE.

It's reasonable to expect it might take a minute for the Apple Watch to "find" LTE after you've walked away from your phone. It's not reasonable for this to take many minutes or not work at all. This almost makes me wish there was a way to actively turn off Wi-Fi on the Watch, so it would just default to LTE. But that’s also another step that I, the wearer, the person-who-is-not-wearing-it-wrong, would have to take.

Apple said it will address the issue in a future watchOS software update, but it didn't specify how long that will take.

Update: According to iMore's Serenity Caldwell, the issue is a watchOS 4 bug that allows the Apple Watch to attempt to connect to Wi-Fi networks with interstitial captive screens such as those that require you to accept terms and conditions. The Apple Watch has no way to acknowledge these interstitials, leaving the device in a state of limbo where it's connected to the Wi-Fi network but can't access the internet and refuses to switch to cellular.

BornAgainMac
That explains why the wife in the keynote was on a board in the middle of the lake.
Score: 21 Votes (Like | Disagree)

960design
While running, having heart attack, cannot call 911 because my watch is connected to someone's coffee pot. A fix, sooner than later would be appreciated, if this is a real thing.

This is an example of what can happen when testing in a closed lab.
Score: 20 Votes (Like | Disagree)

Wanted797
My phone does this.

My work place has wifi I’ll often walk away or to the bathroom and Have to turn off wifi on my phone during the walk because it struggles to load, as it desperately tries to cling to the wifi.

I have wifi assist turned on and still doesn’t help. They need maybe a time out. Once 5-10 seconds has passed use LTE.
Score: 18 Votes (Like | Disagree)

All the SS models are cellular, you can’t buy a non cellular SS model.

At least this bug isn't as bad as Face ID

Really? How are you enjoying your iPhone X?
Score: 11 Votes (Like | Disagree)

Richardgm
This isn’t good. That 5/10 rating should rattle some cages.
Score: 11 Votes (Like | Disagree)
Read All Comments

Thursday September 29, 2022 12:38 pm PDT by Juli Clover
Tony Blevins, Apple's vice president of procurement, is set to depart the company after he made a crude comment about his profession in a recent TikTok video, reports Bloomberg. Blevins was in a video by TikTok creator Daniel Mac, who was doing a series on the jobs of people he spotted with expensive cars. After seeing Blevins in an expensive Mercedes-Benz SLR McLaren, Mac asked Blevins what ...
Read Full Article • 667 comments