While a few weeks remain until Apple is expected to unveil the so-called iPhone 8, widely rumored to be its first smartphone with an OLED display, the rumor mill has already turned its attention to next year. 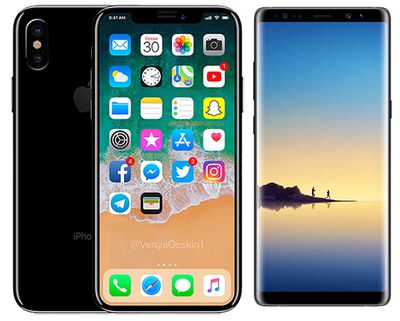 Samsung's Galaxy Note 8 next to iPhone mockup by Benjamin Geskin
South Korea's ETNews, citing unnamed industry sources, claims Apple is working with Samsung Display and its other suppliers on the development of next-generation OLED displays in 5.85-inch and 6.46-inch sizes.

The report said the displays are expected to be used in new iPhone models released in 2018, although Apple's plans could change.

With a nearly 6.5 inch display, the so-called iPhone 9 would have an even larger screen than the 6.3-inch Galaxy Note 8 introduced earlier this month. Meanwhile, the 5.85-inch version would likely be the same size as the iPhone 8.

With reduced bezels, the overall physical sizes of the 5.85-inch and 6.46-inch iPhones could be similar to the iPhone 7 and iPhone 7 Plus respectively.

In May, South Korean publication The Bell reported that Apple was planning to launch new iPhones with 5.28-inch and 6.46-inch OLED displays next year, but ETNews claims development of the 5.28-inch size has been abandoned.

"This is because consumers have preferred to use a large screen, and technologies such as full-screen or bezel-less have been developed that can enlarge the display while keeping the overall size of the smartphone small," it said.

The bottom line here is a second source lending support to rumors of a 6.4-inch iPhone launching next year. It might seem early in the cycle, but iPhone 8 rumors first surfaced in March 2016, nearly a year and a half ago.

GoodWheaties
Sigh. All I ask for is a phone I can use with one hand 100% of the time. Anything else is unacceptable.
Score: 27 Votes (Like | Disagree)

T'hain Esh Kelch
I'd like an iPhone 4 sized iPhone with an edge to edge screen, similarly in design to what is rumored for the iPhone X Edition 8 Superman.
Score: 18 Votes (Like | Disagree)

Will only cost a kidney and two kids.

Perfect. I won’t even have to save up ;)
Score: 10 Votes (Like | Disagree)
Read All Comments