Last week, Jay-Z's new album "4:44" debuted exclusively on his own music streaming service Tidal, and then reports predicted that the album would expand to Apple Music and other services one week later. Now, 4:44 has begun streaming on Apple Music, and is available for $9.99 on iTunes [Direct Link].

Earlier in the week, Jay-Z debuted a video for one of 4:44's tracks, The Story of O.J., on Apple Music while the album was still a Tidal exclusive. Even during its one-week exclusivity window, 4:44 went platinum in under a week, certifying that the record has sold 1 million equivalent album units in the United States. One equivalent album unit represents one full album sale, ten tracks sold from an album, or 1,500 on-demand audio and/or video streams from an album as of February 2016. 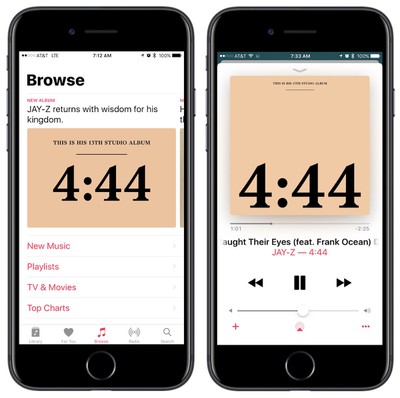 In the midst of Jay-Z's new album launch, Kanye West -- one of Tidal's initial sixteen artists/co-owners -- was reportedly seeking to end Tidal's exclusivity rights over his new music and break from the service (via Billboard). West was said to claim he was owed "more than $3 million" because his album "The Life of Pablo" "resulted in 1.5 million new subscribers to Tidal, for which he was supposed to get a bonus but the company hasn't paid."

Now, a source close to West has said that Tidal's exclusivity rights to his music have been terminated, "based on what is alleged to be Tidal's failure to honor its financial obligations." West has been vocal in the past about company rivalries negatively affecting the music industry as a whole, eventually allowing The Life of Pablo onto Apple Music after first saying it would "never" happen.

In addition to Apple Music, 4:44 has also begun streaming on Amazon Music Unlimited, although Spotify has not been included in the expansion of Jay-Z's newest album. Earlier this year, Jay-Z removed his entire catalog of music from Apple Music and Spotify, without giving a clear indication as to why, and while many of the songs reappeared on Apple Music a few days later, most of it remains missing from Spotify.

The song is less than three minutes. Why don't you listen to it to find out?

This audience never passes the opportunity to bash on hip-hop albums any time it's news on this site, then are confused why Apple promotes them so much. It's because the artists are relevant and most of the ones who are promoted, are deeply profound with a relatable message.

If you're proud to boast how "rap's not your cup of tea," this album is actually perfect for you to listen to because:

* It's now on Apple Music, so you have no barrier of entry as a subscriber

* The whole thing is only 37 minutes
* Regardless whether you've listened to Jay-Z before or not, he's a successful businessman and billionaire, and this album documents his personal failures as a husband and father, in addition to sharing his wisdom and advice from his mistakes
* It's mature, adult music with a message, and isn't about "gang banging," womanizing or any typically negative stereotypes associated with rap
* And yes, even if you're a middle-aged, white guy in America, Jay-Z's stories of his mother's coming out, his marriage infidelity, and even his fear of how his children think of him once they're of age to form an opinion, is something we all struggle with, regardless of creed

In summation, just chill out and listen to at least the first track.
Score: 17 Votes (Like | Disagree)

What is Tidal? Who is Jay-Z?

The Toyota JZ engine family is a series of inline-6 automobile engines. A replacement for the M-series inline-6 engines, the JZ engines were 24-valve DOHC engines. The JZ engine was offered in 2.5- and 3.0-litre versions.
Score: 16 Votes (Like | Disagree)

LewisChapman
These rappers need to get over themselves.
Score: 11 Votes (Like | Disagree)

Porco
It's nice to see such old music getting such attention, I mention, this is breaking the tension, that's something I'm sensing. I just hope such commercial chronological diffidence doesn't spoil the experience for those who weren't handed, back in the day when the album first landed.
Exclusives on Tidal don't rival the survival of the titles of contenders like iTunes, they're pretenders. Lossless as a weapon is hopeless that's a lesson, back to school when you were freshmen, told you a week is not impressing.
Twenty-Four-Seven of duration 36:11? 4:44, you played it 2-7-5 times, no more, so was it worth it, signing for the service that only got you those extra days of verses?
We rehearse this: exclusives should go ride in hearses, they benefit no-one but salesmen, prompting curses, and worse is that fragmenting music is hard on the art, it breaks all our hearts, is that even smart?
Score: 10 Votes (Like | Disagree)

Kebabselector
I'm sure his fans that are Apple Music subscribers will be happy. For the rest move along and enjoy your own music tastes.
Score: 9 Votes (Like | Disagree)

rudychidiac
What is Tidal? Who is Jay-Z?
Score: 9 Votes (Like | Disagree)
Read All Comments