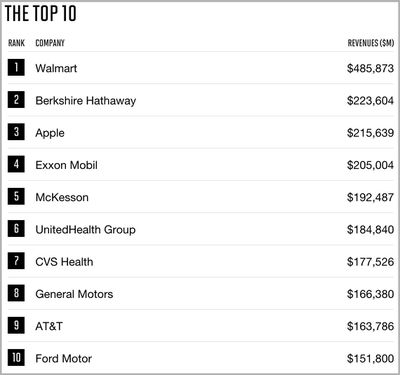 A chart of Apple's Fortune 500 history, including its lowest spot at #325 in 2002
Apple's profile on the Fortune 500 list this year talked about the company's recent sales troubles with Apple Watch and iPad, as well as an increasing reliance on iPhone sales, stating that, "Apple finally appeared to hit a wall." References were also made to Apple's look forward into an self-driving vehicle system and its focus on software services.


After more than a decade of solid growth fueled first by the iPod music player and then by the even more popular iPhone, Apple finally appeared to hit a wall, with lackluster sales—relatively speaking—for other products such as the iPad and Apple Watch and a heavy reliance on upgraded phone models. But the most profitable publicly-traded company in the world is investing heavily in software and its efforts in new areas of opportunity, including automobiles, remain in development (and under wraps). Apple was founded in 1977 and is headquartered in Cupertino, Calif.

It's telling that you have nothing bad to say about Exxon Mobil.
Score: 7 Votes (Like | Disagree)

GeneralChang
Tim must be so frustrated. Based on what I've been reading online, he's been trying his hardest to kill the company for years. /s
Score: 6 Votes (Like | Disagree)

Clearly on a downward spiral.

Having high revenue, while good for the business investors, may not always be the best in the long run. For example, if I am running a health care insurance like #6 United on that list, I can increase my revenues by just denying care to everyone, which is probably what is happening, sadly :( If United has to pay for all of those peoples worsened conditions in the years to come that could have been treated more cheaply if caught earlier, then longer term revenue will fall unless they figure out a way to jettison the sick, which is again likely what will happen :(
As a more concrete example, Verizon today disclosed a settlement where they have to repair many thousands of dangerous telephone poles, that they previously did not want to repair to increase their short term revenue.
That is part of the reason why pure revenue growth looked at in isolation is not a good prognostic indicator of the company's future success. For example, Apple could raise the cost of the next iPhone to start at $1000 and go up to $2000. They would invariably increase their revenue, but likely their user base would diminish, and downstream effects from that contraction could potentially be more damaging than any short term gain in revenue.
Score: 3 Votes (Like | Disagree)

It was surprising that despite their preoccupation with the upcoming big move, they still managed to come up with such an impressive roster of worthwhile hardware refreshes and promising new software features.

I was reading that this was the most hardware Apple Has launched during any WWDC and it was totaled around $34,000 worth of hardware with upgraded specifications and new product releases. But some will still find a way to complain that Apple doesn't care about their product line.
Score: 3 Votes (Like | Disagree)

Good luck with that.
Score: 2 Votes (Like | Disagree)
Read All Comments