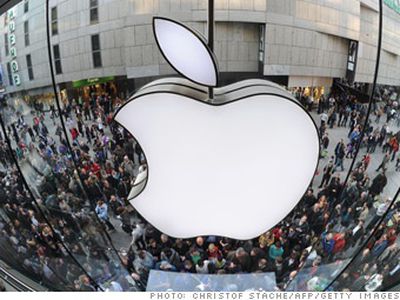 Fortune today released its annual "Fortune 500" rankings of America's largest companies by revenue, revealing that Apple leapt 21 spots this year to land at #35 with over $65 billion in revenue.

Apple climbed 21 slots into the top 50 of the Fortune 500 this year. How'd it get there? The company not only continues to expand its reach in existing markets, it also keeps creating new ones.

Take the iPad, which showed the world the power of tablet computing when it was introduced last year. iPad 2 followed, and was one of the most highly anticipated electronic products this year. CEO Steve Jobs' appearance at its debut in March reassured shareholders worried about his most recent medical leave. Regardless of who's in charge, though, investors have plenty of reason to believe Apple's magic spell on consumers can continue.

Apple's profits of $14 billion in 2010 also made it the 8th most profitable company, up from 26th place last year. In the Computer and Office Equipment category, Apple passed Dell in overall revenue to move into second place behind HP. Apple leads that category in profits by a wide margin.

Apple was also cited as one of the seven biggest hirers of 2010, adding 12,600 employees during the year to reach nearly 50,000 total employees. Apple also leads the Fortune 500 in average annual investment returns over the past decade, averaging 45.8% annual growth.

Overall, Wal-Mart repeated as the world's largest company with $421 billion in revenue, well ahead of second-place Exxon Mobil's $354 billion figure.

DTphonehome
Love the point about hiring. Apple haters should at least be proud that in a brutal global economy, there's at least one company adding jobs at a fast clip right here in the USA!
Score: 5 Votes (Like | Disagree)

Tones2
For anyone who equates size to quality, remember that Wal-Mart is #1 and Exxon is #2. :p

"We are the Borg. Lower your shields and surrender your ships.
We will add your biological and ethnolocial distinctiveness to our own.
Your culture will adapt to service us. Resistance is futile."

The funny thing is that I remember a time when people used this quote to sneer at Microsoft. And there was a time when Apple was the underdog and created the 1984 commercial. Now with that tight iTunes/iOS control freak software, I doubt that they would make such a commercial again.


Apple has become exactly what they were originally against. They are the establishment now, and the flock bought it hook, line and sinker.
Score: 2 Votes (Like | Disagree)

Love the point about hiring. Apple haters should at least be proud that in a brutal global economy, there's at least one company adding jobs at a fast clip right here in the USA!

C. Alan
The Ipad is not Apple's secret to sucess. Their secret is being able to create markets for their products where no market previousely existed. That being said, the Ipad is a case in point.
Score: 2 Votes (Like | Disagree)
Read All Comments

Friday September 30, 2022 12:51 pm PDT by Juli Clover
Apple CEO Tim Cook has been touring Europe this week, sitting down for interviews with various media publications. Augmented reality has been a running theme in Cook's discussions, and it is a topic he brought up again in an interview with Dutch publication Bright, which is part of RTL News. "I think AR is a profound technology that will affect everything," Cook said, echoing comments from...
Read Full Article • 261 comments